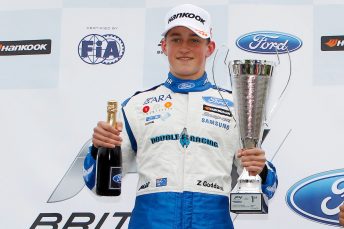 Zane Goddard will return to Australia to contest the final round of the CAMS Formula 4 Championship at the Castrol Gold Coast 600 next weekend.

The Gold Coast teenager is set to team up with DREAM Motorsport for the one-off drive which follows an impressive end to his maiden British Formula 4 Championship campaign.

Since moving to Europe, the 17-year-old has scored four race wins and a further four podium finishes in the second half of the season to claim eighth in the overall standings.

Looking forward to coming home, Goddard says he is proud of his achievements in the hotly contested British F4 series.

“It is going to be good to be racing back in my home town,” Goddard told Speedcafe.com.

“It was a good meeting last year and it will be great to catch up with the guys I raced with last year.

“The start of the year in England was quite difficult as I was getting my head around the car, the tracks and the conditions.

“When I went over to England I didn’t really know what to expect.

“Towards the end of the season we really got on top of it and the results obviously showed that.”

Goddard is weighing up his options for next year with a second season in British F4, or a move to the BRDC British Formula 3 Championship his preferred destinations.

He is set to conduct a second test with the squad at Oulton Park today prior to his return home.

“I’m not sure at the moment whether it is another year of MSA Formula 4 or BRDC Formula 3, but it will just depend on how all the testing goes.

“I think the two years of F4 has been a good thing for me and you can see it in my results.

“Every time I get in the car I learn it a bit more and progress my driving.

“So far it seems pretty promising with F3. I don’t think we are that far off the pace in the F3 car but we will see how Friday goes and that will help determine it.

“The cars are quicker but at the end of the day it is just a car. It is not a drastic difference and the racing will be the same.

“It is not a huge jump up but it is definitely something I can do.”