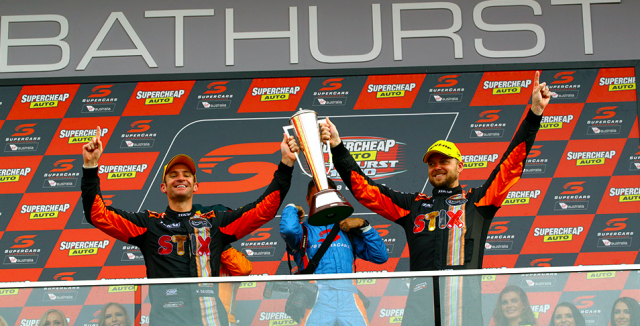 Davison and Webb with the Peter Brock Trophy

Will Davison and Jonathon Webb’s victory in the Supercheap Auto Bathurst 1000 has been put beyond doubt following an interim ruling from the Supercars Court of Appeal.

Statements from CAMS and Supercars have today confirmed that Triple Eight’s initial Notice of Intention to Appeal filed on Sunday night at Bathurst was related only to the severity of the penalty handed down against the #88 Red Bull Holden.

The Jamie Whincup/Paul Dumbrell entry was dealt a 15 second post-race penalty for contact with Scott McLaughlin on lap 150 of 161, dropping the duo from first to 11th in the result.

According to Supercars, “the appeal could only seek to downgrade the penalty from a grade two to a grade one which carries a 10 second penalty and could not have the incident re-investigated or the charge dropped.

“Triple Eight’s attempt to amend their appeal was today rejected by the Court. Triple Eight may still choose to appeal the severity of the 15 second penalty on Car 88 and, if so, they must do so by 5.55pm today.

“Supercars Australia respects the right of all teams to appeal the decisions of stewards, however it also recognises the groundswell of opinion from teams, drivers and fans who have expressed a strong desire to see one of Australia’s biggest sporting events decided on the racetrack and not in a courtroom.”

If Triple Eight elects to continue with its appeal and the penalty is downgraded from 15 seconds to 10 seconds, it would put Whincup and Dumbrell eighth in the order.

Moving from 11th to eighth would gain Whincup 36 points, closing the deficit to Shane van Gisbergen down to 103 with 900 still available over the final three events.

CAMS has meanwhile confirmed the three-member panel that has been appointed for the appeal hearing.

“As per the Supercars Operations Manual, CAMS has appointed a Supercars National Court of Appeal that will include three members drawn from a Judicial Panel of independent persons,” read a CAMS statement.

“Sofronoff QC, serving as Chairman of the Court, is the former Solicitor-General of Queensland and is now currently a Member of the University of Queensland Law School’s Advisory Board and a Fellow of The Institute of Arbitrators & Mediators Australia.

“Deputy Chairman Pilgrim is a retired lawyer and has run a successful private practice in Sydney. Pilgrim also has past motor sport experience as a competitor at club level.

“Experienced mediator Blanden QC has served as a member of the Supercars National Court of Appeal since 2007, and was a Chairman on the Panels of Inquiry for CAMS in 2007.”

Details of the hearing, including when it will be held, are expected to be released this evening.

*This story has been amended. Click here to read the fresh version.