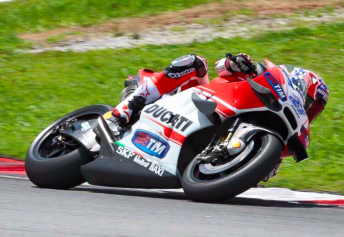 Casey Stoner has declined another opportunity to make his MotoGP comeback at this weekend’s Japanese Grand Prix.

The Ducati development rider was offered the chance to replace the injured Andrea Iannone at Motegi after the Italian failed to recover from a fractured vertebra sustained in a crash at Misano.

Two-time world champion Stoner, who retired from MotoGP in 2012, has been linked to wildcard rides on several occasions this season.

However, despite making an appearances in official test sessions this season for Ducati, the 30-year-old has distanced himself from a competitive race outing.

With development rider Michele Pirro unavailable due to test commitments, Ducati will field just one factory bike for Andrea Dovizioso this weekend.

Pirro is set to replace Iannone for the Australian Grand Prix next week if deemed unfit, although Ducati hasn’t ruled out a return for Stoner on home soil.

“First we have to wait and see if Andrea recovers, and then we’ll see what we do if he doesn’t,” Ciabatti added.

“Initially Casey had no intention to return to the paddock until the final race in Valencia. But maybe since it’s Australia he will change his mind, I don’t know.”