The FT5000 in action at Winton. pic: Vivien Stewart

The prototype Formula Thunder 5000 will make its public debut at the Muscle Car Masters later this month following a successful shakedown on Monday.

Macrow has also been confirmed to be behind the wheel of the Ford V8-powered open-wheeler for the October 29-30 Muscle Car meeting at Sydney Motorsport Park.

The car had been 12 months in development, with its maiden track outing delayed by final work to complete the Hollinger gearbox.

Macrow was joined at Winton by Supercars engineer Wes McDougall as well as representatives from FT5000’s various technical partners.

Category organiser Chris Lambden says he was highly encouraged by the Winton running.

“We thought the systems checks would take all day, but it all went so smoothly that we had the chance to ramp it up throughout the afternoon,” Lambden told Speedcafe.com.

“After all the work that has gone in, it was pretty exciting for everyone involved to see and hear the car on track.

“We were running everything fairly conservative in terms of set-up and lap times weren’t really our focus.

“But we were into the low 1:20s which is almost the Supercar lap record.

The car’s test program will continue at Queensland Raceway on November 1 before further running at Phillip Island later in the month.

Lambden hopes that the first public appearance for the car will help attract firm orders ahead of a planned 2017/18 summer series. 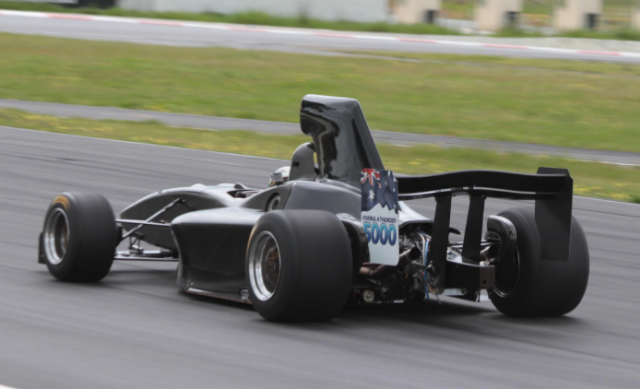 Macrow will be back behind the wheel at the MCM