Lacroix explains cause of #888 failure

Lacroix explains cause of #888 failure 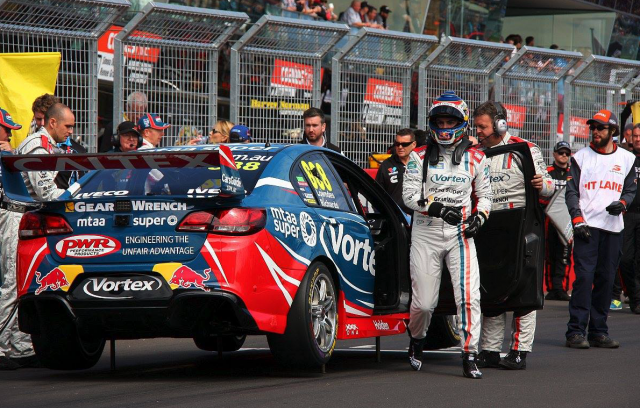 Lowndes and the #888 Holden on the grid

Engineer Ludo Lacroix believes that Craig Lowndes’ Triple Eight Commodore’s gearbox issue during the Supercheap Auto Bathurst 1000 was due to a component being unknowingly pushed beyond its working life.

The defending Bathurst winners were eliminated from contention when car #888 slowed to a crawl at the hands of co-driver Steven Richards 33 laps in.

The TeamVortex entry lost seven laps as the crew attended to a snapped actuator rod which connects the gear shifter to the transaxle in the rear of the car.

“It was the selector linkage, which we (produce) here,” the car’s engineer Lacroix told Speedcafe.com.

“You’ve got probably seven cars which are running them, one broke, and it’s ours.

“It’s probably out of whatever mileage (life), unfortunately.

“It’s not something we break often, we’ve never broken one, so that’s a first.”

The Frenchman, who confirmed that the part had been installed in the car from new at the start of the season.

“It’s a part that gets worn so at some stage it’s going to happen,” he explained.

“Sometimes you’re the first to hit it and it costs you, and then you learn from there.

“Then you say, ‘okay, either I design it differently or I shorten the life of the part and just put in a new part much earlier’.

“We’ll have to look at it. Not all of the car gets replaced every week.”

TeamVortex was one of several hard luck stories over the course of a dramatic race which left Lacroix to lament what might have been after matching the eventual race winners early on.

“It’s a tough day when you start with a big mechanical failure which takes seven laps out of you,” he said.

“You try to get back and when you’re one lap down you can, because you wait for a Safety Car and you get waved through and you’re back in the game.

“When you’re seven laps down, you wait for a Safety Car, you get one back, but then you’ve got to let all the field pass because the rule says you can’t be in the middle of the pack when you join the next Safety Car.

“It’s very difficult to unlap yourself. We took two, that’s all we could do,” he added, referring to the two laps which the car gained back on the leaders.