Davison: ‘No sympathy for anyone’ at Bathurst

Davison: ‘No sympathy for anyone’ at Bathurst 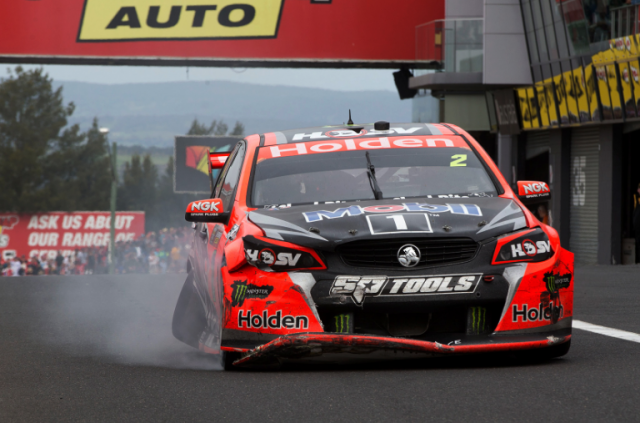 Tander was taken out in the late race accident

Will Davison says he has no sympathy for any of his rivals, including close friend Jamie Whincup and former co-driver Garth Tander, following the dramatic climax to Sunday’s Great Race.

The Tekno Holden narrowly avoided the Volvo and the Holden Racing Team Commodore as they bounced off the concrete wall, before inheriting the lead when Whincup was issued a penalty.

Davison and Webb both said yesterday that they are unconcerned by Red Bull’s appeal against Whincup’s penalty, which could strip the duo of the race win.

Subsequently elaborating with the media in Sydney on how the race unfolded, Davison added that he has no sympathy for any of the drivers taken out of contention.

Davison won Bathurst in 2009 for the Holden Racing Team but had failed to see the podium again until Sunday, despite qualifying on the front-row for the 2011 and 2012 races while with Ford Performance Racing.

“Since ’09 I’ve been on pole and leading comfortably and I’ve had plenty of hard luck stories.

“I’ve got no sympathy for anyone.

“You take these wins when you can get them because you need a lot going for you to win the trophy.

“We put ourselves in the position, we didn’t make the mistakes and we were there to capitalise.”

Davison’s 2009 win game alongside Garth Tander, who many – including the stewards – saw as the innocent party in the lap 150 carnage.

“Garth is pretty opportunistic and it’s rewarded him with lots of great results over the years,” added Davison of Tander.

“To be honest, he could have lifted and he decided to keep it flat (while Whincup slowed to redress with McLaughlin).

“You go for glory and unfortunately the contact was made.

“They all played a part in the incident.”

Davison says that this year’s win means more than his 2009 triumph, where he watched on as Tander took the chequered flag.

“To finish in the car is something that I’ve always dreamed of doing.”