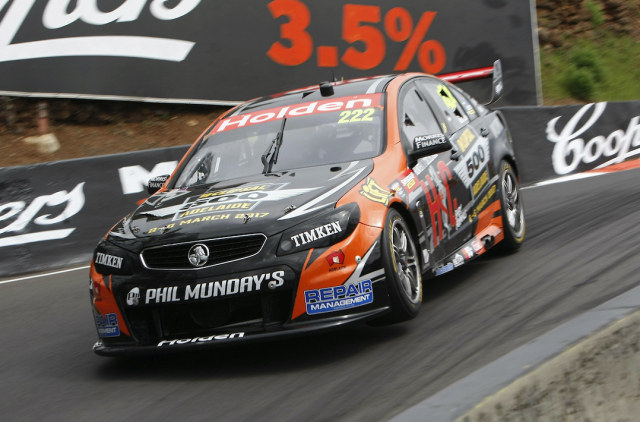 Nick Percat and Cameron McConville’s third place finish at Bathurst has been hailed as ‘like a win’ for Supercars minnows Lucas Dumbrell Motorsport.

Among many to be short on fuel in the closing stages, Percat held off Prodrive’s Cameron Waters on the run to the flag to secure the podium.

It marked Percat’s third career Bathurst podium in just six starts following a win on debut with the Holden Racing Team in 2011 and a third in Walkinshaw’s fourth car two years ago.

The result adds to Percat’s surprise Clipsal 500 victory in March as two clear high points in what has largely been a trying season for LDM.

Percat and team-mate Andre Heimgartner were just 23rd and 24th in points respectively before the Sandown 500, where the former teamed with McConville to bank 10th.

The middle of the season had seen a string of mechanical failures across the cars, a legal dispute with a would-be-sponsor and a restructure that saw the exit of team manager Barry Hay.

“It’s like a win for LDM,” smiled McConville, 42, of the result which signals his sixth Great Race podium.

“Nick put in a very mature drive and obviously the car was good.

“It hasn’t been the best of years for the team, so I’m really proud of this small team and to be able to share in this bit of success.

“It’s very special to be on the podium. It’s my sixth podium, still without a win, so maybe I need to come back.

While heaping praise on McConville, Percat rated his own drive as better than his 2014 podium with Walkinshaw.

“I think this year we had better outright pace and I think I drove a better race,” said Percat, who has moved to 20th in the championship.

“Less mistakes, faster and I managed fuel, which is probably the first time I’ve had to do it since I’ve been in the category.

“Never had I had to manage fuel like that from my side anyway. I was quite happy with how it all went.”

While 2014 saw Percat slip past the out-of-fuel cars of Jamie Whincup and Will Davison on the last lap to take third, this year almost saw the South Aussie miss out as his car coughed .

“Cam Waters actually pushed me across the line, it (the engine) wasn’t even running, so I’ll thank him for that one later,” said Percat.

“It coughed in the kink at The Chase, went silent under brakes and then barked up again on the exit and it had enough of a squirt to get over the hill.

“I held the brake a bit longer than he wanted me to at the exit of the last corner and it just gave me the podium.”

Percat and McConville run third in the Pirtek Enduro Cup after Bathurst, behind only the Will Davison/Jonathon Webb and Shane van Gisbergen/Alex Premat Holdens.