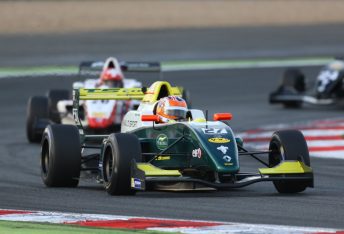 Tasmanian driver Alex Peroni has moved to within touching distance of the Monoplace Challenge title after a clean sweep at the penultimate round at Magny-Cours.

The 16-year-old claimed wins in all three races after qualifying on pole in the Formula Renault open-wheel series.

Peroni now moves into the final round at Estoril with a 155 points lead over French driver Gilles Heriau with a maximum of 180 points on offer.

“This was my most satisfying round of the series so far,” Peroni said.

“I’ve qualified on pole and won two races in other rounds, but something – or someone – always stopped me winning the third one.

“I was a bit worried when the first practice session was shortened from an hour to 40 minutes, which didn’t leave much time to set up the car.”

The final round at Portugal’s former grand prix circuit is scheduled for November 4-6. Yuhi Sekiguchi and Yuji Kunimoto took the victory in Thailand

Yuhi Sekiguchi and Yuji Kunimoto converted pole position into victory in the latest round of the Super GT Series at Thailand’s Chang International Circuit.

Sekiguchi aboard the WedsSport ADVAN Lexus RC F, quickly built up a healthy lead although drama struck shortly before the mandatory pitstops when a left rear tyre failed.

Luckily he was able to guide the car into pitlane and rejoin the race in the lead with Kunimoto at the wheel.

Kunimoto was able to manage the gap back to the Hideki Mutoh/Tadasuke Makino Honda NSX, taking the chequered flag by 2.9s.

The podium was completed by the Lexus RC F of Kazuya Oshima and Andrea Caldarelli.

The Toyota 86 of Takeshi Tsuchiya and Takamitsu Matsui took the win in the GT300 class.

Queenslander Morgan Haber finished 20th behind the wheel of the Australian MARC BMW M6 GT3, which competed under the banner of Thai squad Vattana Motorsport. 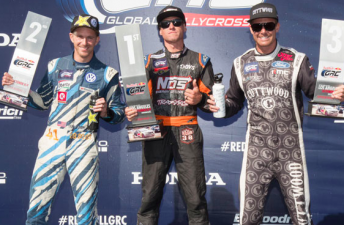 Speed boosted his title hopes by winning the first final from Foust with just a second separating the pair at the chequered flag after 12 laps.

The Volkswagen duo proved to be the class of the field as Chip Ganassi Racing’s Steve Arpin emerged as their nearest contender 9.7s behind in third.

Speed went on to wrap up his second Global Rallycross Championship title by finishing second in the final race of the year.

Chip Ganassi Racing’s Bran Deegan denied Speed from scoring a double victory as he took the win by 0.8s.

Australia’s Chris Atkinson continued to impress in only his third appearance for the Subaru Rally Team USA, after qualifying fourth for the first round and pole for the second.

The former Subaru World Rally Championship driver, who is keen to join the category full-time next year, finished both finals in seventh position.