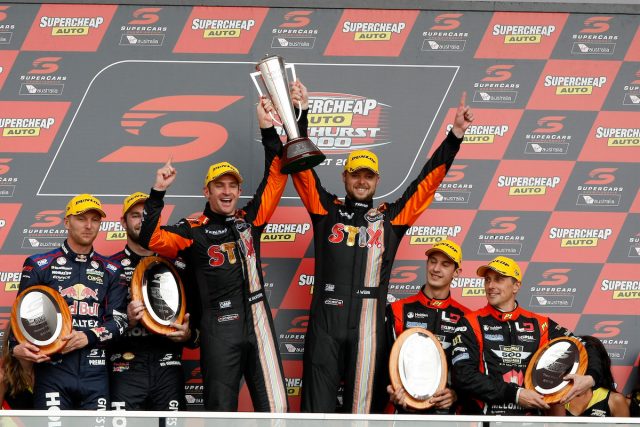 Webb and Davison atop the podium

In a controversial finish, Red Bull’s Jamie Whincup took the flag first on the road before being relegated to 11th thanks to a 15 second post-race penalty.

Knowing that Whincup’s penalty was to be applied, Tekno’s star driver Will Davison had fended off the second Red Bull Holden of Shane van Gisbergen to take the victory.

A subsequent notice of appeal from Red Bull, however, ensures that the result may not be known for several days, with the team currently preparing its case.

Speaking on the Nine Network’s Today Show this morning, both Webb and Davison downplayed Red Bull’s chances of winning the appeal.

“I think it’s a long shot, but it’s a competitive game and everyone wants to win this race,” said Webb.

“They’ll have a crack, but at this stage we’ve won, we’ve got the trophy and we’re going to head home and cheer for it.”

“Not really, no, not at all,” Davison added when asked if he thought Red Bull has a case.

“The penalty was handed out and I was told I was leading with 10 laps to go, so I wasn’t even looking at Jamie, I was looking at Shane.

“I wasn’t even really racing him at that stage. We won the race and that’s it.”

Davison had yesterday described the victory, which came despite needing to save fuel in the final laps, as the best moment of his career.

The win is Davison’s second in the Bathurst 1000 following victory with the Holden Racing Team in 2009.

“The guys’ calculations are seriously accurate,” he said of the fuel scenario.

“It was one lap short, then half a lap short, so I knew that every single millilitre of fuel on the downshift (that I could save would help).

“I was trying to roll out (of the throttle) wherever I could but I knew that on the last lap Shane was going to go for broke.

“I rolled out at The Chase because the yellows (for Todd Kelly’s stranded Nissan) were there and the it started coughing into the last corner.

“Literally, you could not script it. When it coughed across the line it was ridiculous, the best moment of my career.”