The outcome of Red Bull’s appeal against Jamie Whincup’s Bathurst penalty will play a major role in deciding the 2016 Supercars Championship.

Whincup’s demotion from first to 11th in the Bathurst result thanks to a 15 second post-race penalty sees team-mate Shane van Gisbergen’s lead blow out to 139 points.

A 172 point swing towards Whincup would occur if Red Bull wins the appeal, provided the time penalty is not replaced with a points sanction.

While Whincup has now endured controversial late-race disasters at Bathurst in each of the last three years, this is the first that’ll have a major affect on the championship.

Although declining to discuss the penalty in the paddock on Sunday evening, Whincup admitted that the combination of a bad Sandown and Bathurst would be costly.

“It is a blow to the championship, no doubt,” Whincup told Speedcafe.com before learning of the appeal.

‘We had a big hit at Sandown and Bathurst and you can’t afford to have these big hits with not so many rounds to go.”

Neither Whincup nor Van Gisbergen showed any regard for their title aspirations as they fought tooth and nail for victory in Sunday’s Great Race.

Van Gisbergen pushed winner Will Davison all the way to the chequered flag, losing out by just 0.14s after a battle that included contact at Forrest’s Elbow on the penultimate lap.

“I would be killing myself for two weeks if I settled for second,” he said afterwards.

“I’ve always said I wouldn’t think about the championship until after the Gold Coast.

“I’ll be pushing as hard as I can on the Gold Coast, as I was at Bathurst.

“There’s no point conserving. We’ll be trying to get as many points as possible.”

Whincup and co-driver Paul Dumbrell dominated the entire Bathurst weekend until a spate of Safety Cars threw a series of strategy wildcards at teams in the closing stages of the race.

Van Gisbergen and co-driver Alex Premat, however, had a distinctly low-key build-up, with the former qualifying six places behind his pole-sitting team-mate.

The grid positions set the tone for a challenging race for the Kiwi/French combination, which repeatedly had to stack behind their team-mates under Safety Car periods.

“I didn’t do a lap flat-out until after the last Safety Car,” said Van Gisbergen of his day.

“We were saving fuel all day and double-stacked three times.

“It was pretty tough from our end. We had good speed but kept getting put behind.

“The car started the day pretty average but that’s what we’d been working towards, setting it up for the end of the race.

“It was a pretty quiet build-up but we were quietly confident.

“It would have been good to fight it out flat-out, but it is what it is.”

Speaking before the appeal was lodged, Van Gisbergen said he gained some satisfaction from seeing his former crew at Tekno Autosports score the race win.

“It’s one of the few cars that’d you’d be happy for them to beat you,” he said.

“Seeing Geoff (Slater, race engineer) up on the podium and Jono (Webb) and the rest of the boys down below, I’m pretty stoked for them.

“We went through a pretty tough time here a couple of years ago (losing Bathurst in the final pitstop).

“They’re all pretty much the same guys I worked with the last few years.” 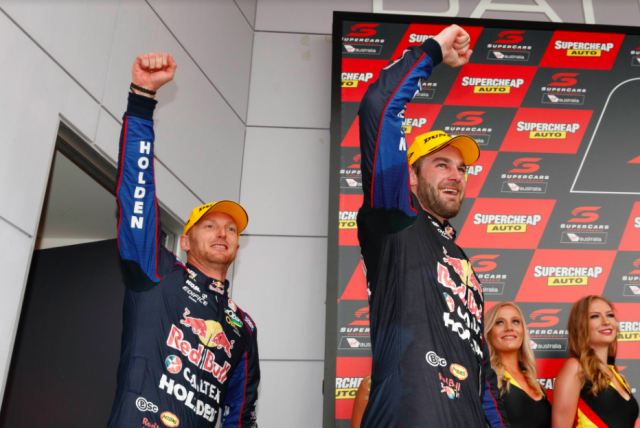 Premat and Van Gisbergen on the Bathurst podium