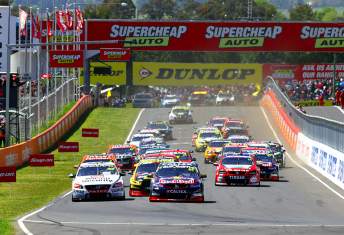 Stewards have confirmed a series of penalties following the Supercheap Auto Bathurst 1000.

The report confirms a 25 point penalty for the #33 Volvo of Scott McLaughlin after officials deemed the Kiwi made an unsafe re-entry to the track following contact with Red Bull’s Jamie Whincup on lap 150.

Following an investigation, stewards have imposed a 25 point penalty on the #22 Holden Racing Team Commodore of James Courtney and Jack Perkins.

The penalty refers to an incident that saw Courtney tag the #7 Nissan Altima of Todd Kelly into a spin on lap 158 at The Chase.

Whincup has also been issued with a $500 fine for failing to obey an order to wear his race suit for pre-event activities.