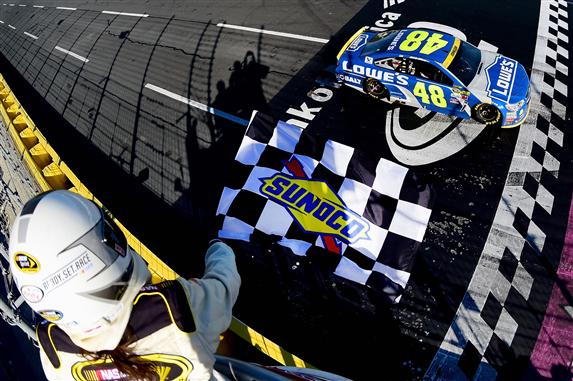 Jimmie Johnson has vaulted into NASCAR championship contention with what could become a critical victory at Charlotte.

Johnson who snapped a 24-race winless streak was able to convert while five of the 12 drivers still in contention in the Chase for the Sprint Cup all finished outside the top 30.

The result is a 78th career win for Johnson and eighth win at Charlotte. The win automatically guarantees him a place in the final eight in the championship.

Johnson had to overcome Matt Kenseth on a late restart to take the lead and pull away for victory.

Although this season has been at times a struggle for Johnson, he and his Hendrick Motorsports team looked like champions as he led 155 laps.

Since the Chase moved to an elimination format in 2014, Johnson had never advanced out of the Round of 12.

Kenseth finished second, Kasey Kahne third, while Ryan Newman and Kyle Larson rounded out the top five. Of the top five, only Johnson and Kenseth are in the Chase.

Denny Hamlin was running in second and had led 52 laps before his engine expired on Lap 307. He finished in 30th.

Polesitter Kevin Harvick had an electrical issue midway through the race and finished 38th.

Tyre issues for Joey Logano saw him hit the wall twice on different occasions. He went to the garage before returning 77 laps down and ultimately finishing in 36th. Last year, Logano swept all three races in the Round of 12.

A big wreck on a Lap 258 restart involving Austin Dillon, Chase Elliott and several others shook up the running order late and brought out a red flag. Both Dillon and Elliott were in the top five at the time and Elliott had led 103 laps on the day.