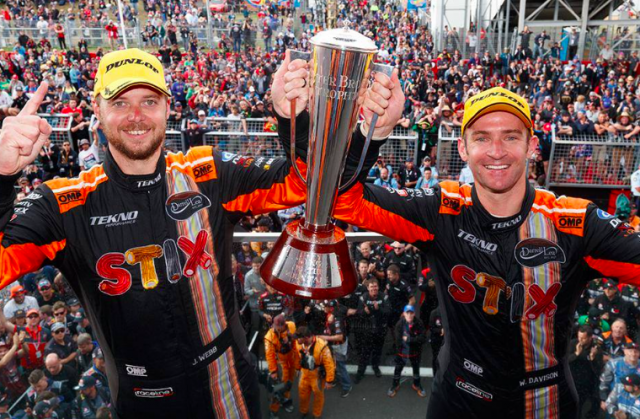 Webb and Davison with the Peter Brock Trophy

Jamie Whincup would not have been a worthy recipient of the Peter Brock Trophy following yesterday’s Great Race, says the late legend’s brother Phil Brock.

Brock handed the trophy to victors Will Davison and Jonathon Webb as part of festivities marking 10 years since the nine-time Bathurst winner’s death.

Whincup had taken the flag first but was handed a post-race time penalty, which is currently under appeal, for late contact with Scott McLaughlin’s Volvo.

Prior to the incident the Red Bull star had dominated much of the race alongside co-driver Paul Dumbrell.

“When it looked like Whincup was going to win I was thinking ‘this is not what the trophy is about’,” Brock told AAP.

“Peter was about racing and giving it your best shot.”

Brock added that his late brother would have enjoyed seeing the tight-knit Tekno crew take the victory.

The result marked the first time a team other than powerhouses Triple Eight, Prodrive and Walkinshaw have won the Great Race since 2000.

Although spending much of his career as a factory Holden driver, two of Brock’s Bathurst wins – 1975 and 1987 – came in against-the-odds privateer efforts.

The latter win was, coincidentally, not made official until months after the race thanks to a successful protest against the Eggenberger Ford Sierras that had finished first and second on the road.

“I think it is fitting a small, hard working team like that won the Peter Brock Trophy,” added Brock.

“Sure Will came from the blue a bit but he had worked so hard.

“Peter would have been going ‘you bloody deserve this’.”

Phil Brock had taken place in a parade of Peter Brock cars ahead of yesterday’s race that featured all 11 drivers to win Bathurst since the trophy was introduced in 2006.