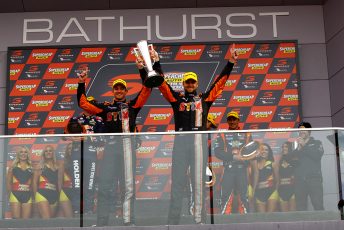 Will Davison and Jonathon Webb have taken a slender six point lead in the Pirtek Enduro Cup following their dramatic Bathurst win.

The win elevated them above Red Bull Racing’s Shane van Gisbergen and Alex Premat – who have finished second in both endurance races so far in 2016, while Nick Percat and Cameron McConville’s third placed finish built on their top 10 Sandown result to place them third on the table heading to the Gold Coast.

The biggest losers from today’s drama-filled final stanza at Bathurst were defending Champions, Garth Tander and Warren Luff – who scored zero points after exiting the race in the incident that involved Jamie Whincup and Scott McLaughlin.

The HRT duo are still mathematically able to win the Pirtek  Enduro Cup – as are 13 other combinations.

The points ladder could change heading to the Castrol Gold Coast 600 should the protest by Red Bull Racing Australia against the 15 second penalty applied to Whincup and Paul Dumbrell be upheld.

With the Peter Brock Trophy still warm in his grasp, Webb’s focus has shifted already to maintaining the points lead and adding the Pirtek Enduro Cup to the Tekno Autosport trophy cabinet.

“Shane and I have won a few races together in the Pirtek Enduro Cup – but now Will and I have the lead – we have to focus on getting one over on him (van Gisbergen) and adding the Cup to the Peter Brock Trophy.”

Davison quipped that Webb may have been getting ahead of himself.

“It would be great if we could enjoy this one for a couple of weeks before thinking about the next one,” the now two-time Bathurst Champion laughed.

The Pirtek Enduro Cup will come to a conclusion on the Gold Coast over the weekend of October 21-23 with 150 points per race up for grabs for a race win.