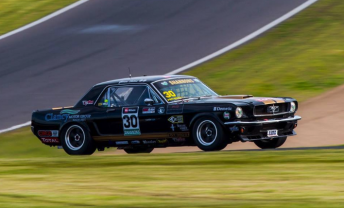 A review of the final day of action from the bumper TCM/Central Muscle Car class, Toyota 86 Series and Utes from Mount Panorama

Glenn Seton has taken a comfortable second race win of the weekend in the Touring Car Masters Trans-Tasman Challenge.

Starting on the inside of the front row as Australia’s TCM cars lined up down one side and New Zealand’s Central Muscle Cars down the other, the Mustang driver made a clean getaway and disappeared across the top on the opening lap.

Dean Perkins backed the field up in the middle sector but had a serious straight line advantage by virtue of the NASCAR engine under the bonnet of his XD Falcon.

Third-placed John Midgley (XE Falcon) presented a similar problem for John Bowe and his more nimble Torana until he made an unforced error and found the wall at Hell Corner on Lap 4.

Adam Bressington did the same next time around, surrendered the place down Conrod Straight, but braked later into the Chase to earn the final step on the podium.

Perkins would be the best of the visitors in fourth, ahead of Steven Johnson, with Australia declared the winner of the Trans-Tasman Challenge by virtue of points accumulated in the final race.

Bowe leads the series with one round remaining at the Coates Hire Sydney 500 from December 2-4. 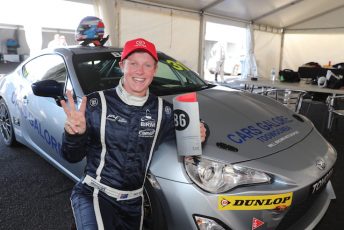 Will Brown survived a frantic finish to sweep the penultimate round of the Toyota 86 Racing Series.

The Formula 4 championship leader made a clean getaway while Steven Johnson passed Dylan Gulson for second after hanging outside of the hometown driver into the Chase on the opening lap.

The Safety Car would nevertheless be required when Frank Mezzatesta found concrete at McPhillamy Park and Michael Fabri headbutted the wall at Forrest’s Elbow after rearward contact from Kane Baxter-Smith.

The green flag flew again with two laps remaining, and a five-way battle for the lead soon developed.

Brown defended into the Chase and then Murray’s Corner on the final lap, backing up the chasing pack as the top five crossed the line covered by less than 0.7s.

Johnson and David Sieders followed the winner, Tim Brook remained fourth despite taking to the grass at the last corner, Cameron Hill was fifth, and Aaron Seton finished less than 0.3s further back.

Cameron Crick slammed the wall hard on both sides at the Esses on the final lap.

Brown’s series lead has grown to 66 points over David Sieders with 300 available at the final round, supporting the Coates Hire Sydney 500 from December 2-4.

*In a post script to the V8 Utes, David Sieders has been elevated to third in Race 3 after a post-race penalty for Mason Barbera. Nathan Pretty won the race.