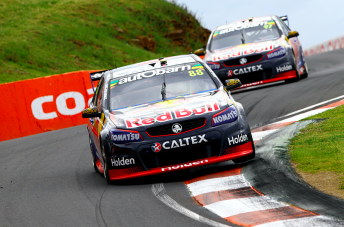 Red Bull Racing Australia will have two days to submit its evidence to the Supercars appeals court after electing to challenge the result of the Supercheap Auto Bathurst 1000.

The Queensland-based outfit is appealing a 15 second time penalty issued to the Jamie Whincup/Paul Dumbrell #88 Holden after contact with Scott McLaughlin on lap 150 that forced the Volvo wide at The Chase.

Whincup slowed to redress behind the Kiwi, which then sparked further contact between Garth Tander (Holden Racing Team) and McLaughlin, taking them out of contention for the win.

The penalty handed Tekno Autosports’ Will Davison and Jonathon Webb the victory while Whincup was demoted to 11th position.

Triple Eight lodged an intention to appeal the result post-race which saw the squad pay a required $10,000 plus GST fee.

The team will now prepare a through explanation of its position and evidence to prove their stance to CAMS.

A hearing will then take place in Melbourne with the timeframe to be set once the evidence has been lodged.

“The first thing to do is the intention to appeal which was lodged with the stewards and was accepted in time and that makes it all official,” Dutton told Speedcafe.com.

“We now have two days to submit what our view of the incident is.

“Our view is, in the drivers’ briefing all year let alone at Bathurst, the drivers were shown videos of level 1, 2 and 3 driving infringements.

“A level 1 infringement is when you go for a dive, you have bit of a rub and that car goes off and doesn’t spin and doesn’t go to the back of the field.

“We have been told all year that the penalty for a level 1 is a redress and if that cannot happen it is a 10 point penalty off the drivers’ championship points.

“There has never been any scope of a time penalty to be issued.

“The appeal goes to the board and it will be heard by other people.”

Dutton confirmed that the team will submit their explanation within the next two days once all the evidence from the car’s telemetry and cameras is gathered.

He also hopes to submit videos produced by Supercars that had been used to explain driving infringements and their penalties.

Under the current guidelines outlined by Driving Standards Officer Jason Bargwanna, Dutton says there is a case that Whincup hasn’t committed an offence.

“The car has only just been released so we haven’t had time to download the data from the car,” he said.

“I have said the severity of the punishment was too harsh.

“We were told we had to redress (for level 1 incidents) which Jamie tried to do.

“The redress had already happened, but I’m not going for that (arguing the case).

“If you look at the footage on the previous lap McLaughlin is on the racing line and then he blocks Jamie which is also said to be not allowed.

“We will check the data but there are no locked brakes, he (Jamie) is not out of control and to make it worse McLaughlin turns in and hits Jamie which pushes him out wide.

“But despite all that he holds the racing line and tries to let McLaughlin redress.

“It is arguable if he has committed any crime but if he has then the punishment is not according to the Bathurst drivers’ briefing.

“We will do whatever CAMS tell us to do and follow their procedures and do it to the letter of the law as we have done so far.

“If I’m able to I will obtain the example video that Bargs (Jason Bargwanna) showed all the drivers.

“He has done a fantastic job recently of saying what the crime is and the punishment will be.”

Dutton reiterated that as far as he is concerned today’s race result is provisional, with Whincup and Dumbrell deserving of the victory.

“It is Bathurst, we crossed the line first and we were not there by accident,” Dutton added.

“We are not trying to get him back up to somewhere he wasn’t.

“We are trying to maintain the finishing position he deserved.”