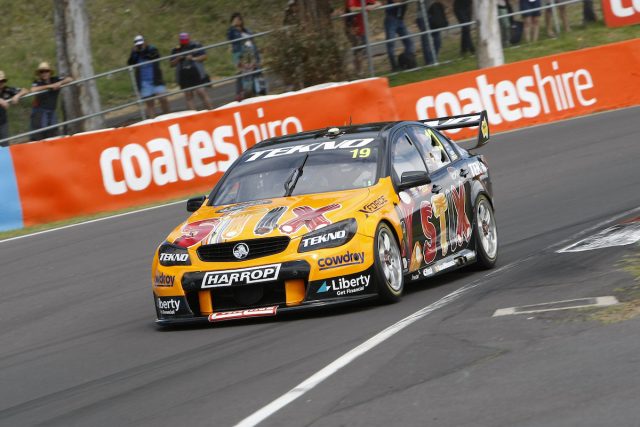 Will Davison and Jonathon Webb have scored victory in a thrilling finish to the Supercheap Auto Bathurst 1000, despite trailing Jamie Whincup to the chequered flag.

Whincup and co-driver Paul Dumbrell dominated much of the race, but were dealt a 15-second post-race penalty with nine laps remaining.

The penalty came after Whincup bumped Scott McLaughlin wide at The Chase, subsequently taking the Volvo and Garth Tander out of the contest as he attempted to redress.

Whincup edged away at two subsequent restarts while Davison focussed on holding off Shane van Gisbegen in the second Red Bull Holden behind.

The Tekno Commodore took the flag 0.14s ahead to score the narrowest victory in the history of the Great Race.

“I’m honestly speechless,” said Davison after a battle with Van Gisbergen that saw them both being told to save fuel right until the end.

“That was so stressful. I knew if I lifted to save any more Shane was going to be in there.

“It coughed as I came around the last corner and ran out of fuel as I crossed the line.

“We started 17th but we knew we were quick. I can’t believe the way it panned out.”

Second for Van Gisbergen alongside co-driver Alex Premat extends his championship lead over Whincup, who was eventually classified 11th.

Whincup was left to apologise to the Volvo and Holden Racing Team outfits, although disagreed with the decision that he was at fault.

“I feel sorry for the result, you don’t want to see any wrecked cars,” he said.

“But I felt the move was on. I was in there, he squeezed me narrow and we had contact.

“I was happy to redress, but the two cars weren’t there to redress.”

Nick Percat scored his second Bathurst podium in three years after a faultless performance in the Lucas Dumbrell Motorsport Holden he shared with Cameron McConville.

Coulthard led the race with as few as 11 laps to go, but was always destined to require an extra fuel stop.

After a long spell of green flag running, the spate of Safety Cars began with a big crash for Andrew Jones at Sulman Park on lap 90, from which the driver emerged bruised but unscathed.

Todd Kelly speared into the gravel at The Chase after the final restart thanks to contact from James Courtney – an incident that was dealt with under local yellows.

Winterbottom and co-driver Dean Canto had been in contention all day prior to their demise, which has ended any realistic chance of the Ford driver retaining his Supercars title.

Furthering Prodrive’s woes was a throttle issue for its Chaz Mostert/Steve Owen entry that saw it finish 14 laps down in 19th place.