Whincup/Dumbrell in command at halfway

Whincup/Dumbrell in command at halfway Whincup leads away from pole

Jamie Whincup and Paul Dumbrell hold a commanding position at the halfway mark of a Supercheap Auto Bathurst 1000 that saw an early disaster for Craig Lowndes.

Pole-sitters Whincup and Dumbrell have led all but a handful of laps in a race that is yet to see a single Safety Car intervention.

The #88 Holden completed its fourth pitstop just prior to halfway and leads the Scott Pye/Tony D’Alberto Ford by 14 seconds.

D’Alberto had been the only leading co-driver to start, with the Shell Ford off-sequence having only done three stops.

The Shane van Gisbergen/Alex Premat Red Bull Holden is third on the road and effectively second, 34s behind Dumbrell.

The opening 500km were run in just three hours thanks to a lack of Safety Cars and a hot pace at the front.

“The track is changing quite a bit with all the rubber going down, but we’re in the window,” said a cautious Whincup.

“We’re in a good place, PD is doing a good job and we are just keeping our heads down.”

A long delay for the Lowndes/Steven Richards Holden was the biggest talking point of the opening hours and promises to have a major impact on the championship fight.

Lowndes had charged from 21st to the brink of the top 10 in his opening stint, dicing with Will Davison in a battle for pit priority against the Tekno car with which he shares a boom.

Co-driver Steven Richards was at the wheel of Lowndes’ car when it suffered a rare gear linkage failure on lap 33, which saw the Commodore garage bound for six laps while repairs were made.

“We had no issue or feeling of the problem until it broke,” said Lowndes.

“We’re all disappointed. We just want to finish the race now and get some good points for the championship.”

A strong run from Tim Slade/Ash Walsh was halted in the third stops, where a bungled brake pad change cost the Freightliner Holden two laps.

Walsh had been running second prior to the stop, proving the only co-driver able to run with the dominant Dumbrell.

“We’ve got an extremely quick car but i think it was just a bit of a miscommunication between the boys.

“I was told to pump the pedal because they thought the pads were done and they weren’t, so it popped the pistons out.”

A brake pad change also proved costly for the Chaz Mostert/Steve Owen Ford, which had inherited second from the Freightliner entry.

Mostert lost more than 30 seconds on his out-lap when he was forced to driver gingerly while he struggled to regain brake pressure.

The Supercheap Falcon is currently outside the top 10 as a result, over a minute from leader Whincup.

The Shae Davies/Chris van der Drift and Jason Bright/Andrew Jones Holdens are meanwhile off the lead lap after spending time in their respective garages with mechanical issues.

The only car out of the race is the Lee Holdsworth/Karl Reindler Team 18 Holden, which broke a rocker on the opening lap.

“When the rocker broke it bent a valve in the engine so the car requires a complete engine change,” said dejected team owner Charlie Schwerkolt.

“I’m absolutely gutted and devastated for the whole team.” 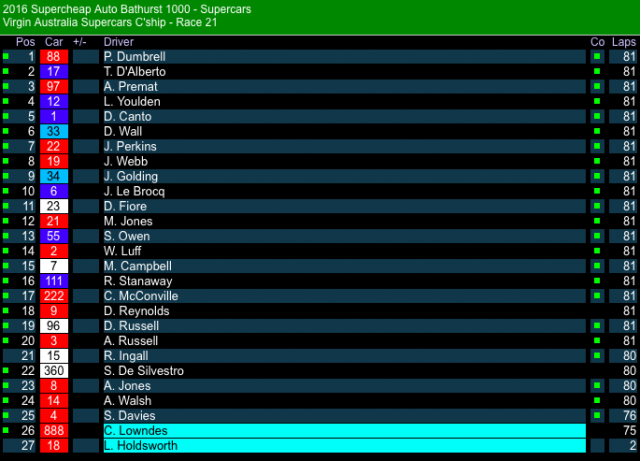