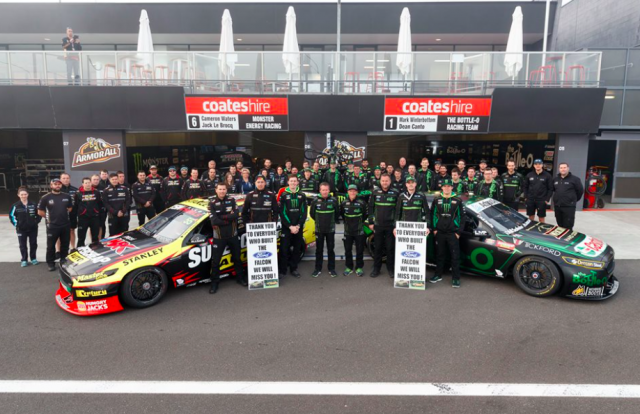 The Prodrive team paid tribute to Ford workers at Bathurst

Prodrive is currently assessing a variety of Ford body shapes that could replace the Falcon in Supercars for 2018, co-owner Rod Nash has confirmed.

The final Falcon rolled off the Ford Australia assembly line on Friday as the company concluded a 91 year spell of local manufacturing.

Prodrive and DJR Team Penske have both committed to racing the Falcon next season, despite a lack of financial backing from the manufacturer.

While Ford has given no indication that it will reverse its decision to exit the category, Nash says that his team is eager to continue running Blue Oval products in 2018 and beyond.

Prodrive recently launched a sister company Tickford, which will offer aftermarket parts packages for a number of Fords, starting with Ranger and Mustang.

The team, which like DJRTP has a license to use the Ford brand on its cars and merchandise, posed for a group photo at Bathurst on Friday to show support for Ford Australia’s employees. 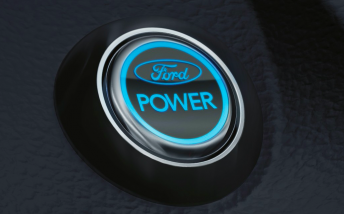 Prodrive is eager to continue with Ford beyond the Falcon

“Prodrive is known as being Ford, being blue and that’s what Tickford will be playing with.

“It would take a lot for us to be persuaded to do anything else (with the Supercars team if another manufacturer deal was on the table).

“Money is one thing, but your branding is worth a lot. If you change (manufacturers), what is your fan base?

“We respect our fan base. There’s years of work there and a lot of loyalty.”

While homologating a new Ford Supercar for 2018 would need the manufacturer’s blessing and engineering support, Nash says it can be done without factory funding.

A similar arrangement was struck with the FG X Falcon, which was funded by Prodrive and DJR Team Penske with technical help from Ford.

Nash confirmed that his team has looked at how the Mustang body can be fitted to the current control chassis, but stressed that other Fords – namely the Focus and Mondeo – are also being assessed.

“We’re looking at all Ford body shapes at the moment, it’s not just Mustang,” said Nash.

“We’ve got to look at everything to weigh up what’s right and wrong.

“You can’t just pick something that looks cool and say ‘that’s the logical choice’.

“If it’s un-engineerable, then you’ve got to look at all options.” 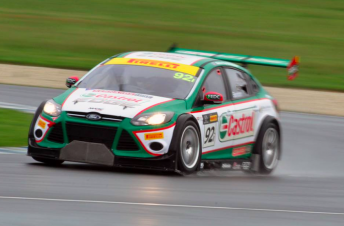 A Focus Supercar, similar to the MARC V8, is under consideration

Nash concedes that decisions would need to be made sooner rather than later in order to have a new car up and running for 2018.

Any changes that may be required to the control chassis to fit a body such as the Mustang would need to go through the Commission and would likely be met with resistance from other teams.

The category has repeatedly stated that the current control chassis will remain until 2021.

“It’s what we’re working towards (2018), but there’s nothing even close to definite that we’d achieve it by then and what the body shape would be,” Nash cautioned.

“At the moment we’re doing our homework and starting to lay a path for where we might go.

Regardless of the body, Nash says that any new Prodrive-built Ford Supercar would almost certainly run with the team’s existing 5.0 litre V8 engine due to the high cost of a changeover.

“V8s are very much part of what we do and personally we don’t see too much change to that in the near future,” he said.

“At this point anything would have to be a V8. That can change, but we’re just concentrating on the body shape at the moment.” 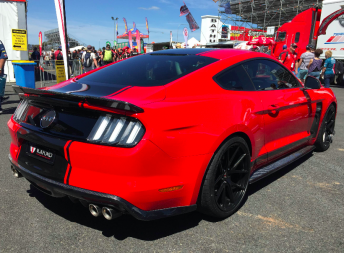 The Tickford Mustang at Bathurst

Nash meanwhile hopes that the Tickford business can form a mutually beneficial relationship with the Supercars team.

The opportunity to benefit both Prodrive and Tickford would strengthen the business case for funding the development of a new Ford Supercar.

“That’s part of us being our own business and creating other businesses within,” he said of funding a new car.

“Tickford is being built as a business to make a dollar and if it can do that, hopefully it can sponsor the race team.

“We’re using the race team now for some marketing, but that doesn’t mean that wouldn’t end up being official sponsorship.

“It’s no secret that the sponsorship market has tightened up and we see this as a good fit.”

A ‘prototype’ Tickford-enhanced Mustang is on display at Bathurst alongside the recently launched Tickford Ranger.