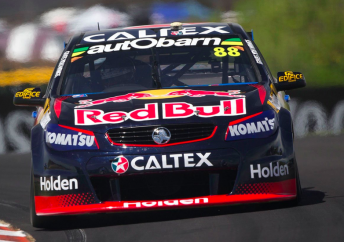 Jamie Whincup stole pole position for the Supercheap Auto Bathurst 1000 from Scott McLaughlin by just 0.065s in a thrilling finish to the Top 10 Shootout.

The result firmed Whincup and Paul Dumbrell’s position as favourites for tomorrow’s 161 lap race after topping the bulk of the preliminary practice and qualifying sessions.

Whincup left little on the table during his lap, which included a brush with the wall at the exit of Forrest’s Elbow.

A slide out of The Dipper also had onlookers holding their breath as the Red Bull Commodore narrowly avoided the right-hand fence.

“The car is obviously very good and I’m happy to get the result,” said Whincup after stopping the clocks at 2:05.43s.

“It’s not every day you get to qualify at Bathurst so you have to have a crack.”

Scott McLaughlin had been the penultimate man on track and likewise bumped Chaz Mostert from the top by a scant margin.

“I gave it my all and I wanted pole, but congratulations to Jamie because he did a great lap,” said McLaughlin.

Mostert was left to rue a small mistake in what was his first ever Bathurst Shootout appearance.

“I just got caught up in the moment and made a little error into The Chase that would have made it really close,” he said.

Caruso was the first to run in his first Bathurst Shootout appearance and lifted expectations of a record time with a 2:05.92s effort.

Tander, Pye, Winterbottom and Van Gisbergen all failed to go faster before Coulthard finally knocked the Nissan from P1.

Winterbottom’s lap included an off at The Chase while Van Gisbergen did his best with a Red Bull Holden that struggled for rear grip throughout the lap.

Sunny conditions prevailed throughout the session, which saw drivers unable to reach the 2:04s bracket that many had tipped to be required for pole.