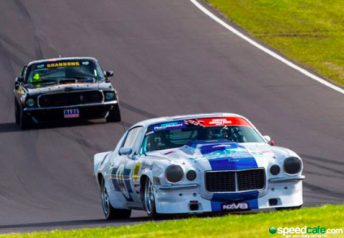 A review of the action from the combined TCM, New Zealand Central Muscle cars, Toyota 86 Series and the Utes at Mount Panorama.

Colin Meadows (Chevrolet Camaro) got one back for the Kiwis in Race 2 of the Trans-Tasman Challenge at Mount Panorama.

Starting outside of Paul Clarke (Ford Mustang) on the front row of the reverse grid race, Meadows tailed his Central Muscle Cars contemporary at the head of the field before making the decisive pass on the fourth of six laps.

Adam Garwood and Adam Bressington cut a swathe through field, making up 32 and 35 positions to finish sixth and seventh, respectively.

Steven Johnson had a more difficult run as he finished 18th from 41st on the grid.

Ironically, the second generation racer was held up by Greg Cuttance’s Tru Blu-tribute XE Falcon through McPhillamy Park on the opening lap.

The final race, which will pit the Australians against the New Zealanders on opposite sides of the starting grid, takes place tomorrow from 0835 AEDT. 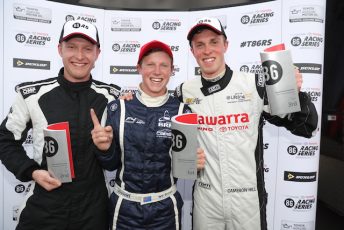 Will Brown starred in the Toyota 86 Series

Will Brown bagged a pair of Toyotas 86 race wins after Aaron Seton was penalised for a restart infringement in Race 1.

David Sieders led the field out of Griffins Bend before pole-sitter Seton reclaimed the place down Conrod Straight.

John Iafolla slammed into the wall at the Esses on Lap 2, Will Brown rounding up Sieders at the Chase just before the SC boards appeared.

Seton gapped Brown upon the restart but was judged to have accelerated early, the resulting five second penalty sending him back to eighth., behind a podium of Brown, Sieders, and Dylan Gulson.

Sieders again made a good start to Race 2 but was passed up Mountain Straight by Brown and Gulson on consecutive laps.

The race ran Safety Car-free despite a number of incidents, the most spectacular being at the Chase when Daniel Rein Ooi spectacular rode up on the side of Christopher Manley and nearly rolled.

Cameron Hill took advantage of a fascinating battle between Sieders and Steven Johnson to pinch third at the final corner, behind Brown and Gulson. Kim Jane and Nathan Pretty split the race wins while Ryal Harris took overall honours as Round 6 of the V8 Utes concluded.

Jane led from the start and managed to hang on despite side-to-side contact with series leader David Sieders down Conrod Straight on the final lap.

Andrew Fisher’s race ended at the second corner when he tangled with Craig Dontas and speared into the wall.

Pretty ran away with the finale, while Race 1 winner Harris earned the round win when he fought back to second after dropping from pole to fourth on the opening lap.

The penultimate round of the series supports the Castrol Gold Coast 600 from October 21 to 23.