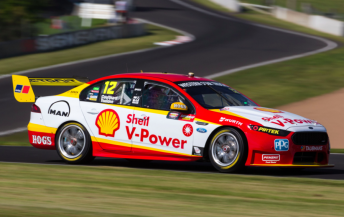 Penske is making his maiden appearance at the Supercheap Auto Bathurst 1000 on a weekend that has coincided with Ford closing its Australian manufacturing plants.

The business mogul and racing legend affirmed that DJR Team Penske will remain with Ford next year, but isn’t ruling out a switch for 2018.

DJR Team Penske and Prodrive both currently operate without funding from Ford Australia but are licensed to use the company’s brand on their cars and merchandise.

“We’re committed to Ford,” said Penske when asked of his team’s status with the company.

“We have a major relationship with them in the US in NASCAR where we’re running two cars and a car with the Wood Brothers.

“I would expect as we go forward, certainly next year, we’ll be with Ford.

“We’re a team that is looking for opportunities so if something would come up that we felt would be of benefit to the overall operation we might take a look at it.

“But I would say today that we’re steadfast in the Ford camp.”

Penske’s visit to Bathurst follows the announcement that Shell has signed a multi-year deal with the team to sponsor both cars on a full-time basis through its V-Power brand.

The sponsorship complements Penske’s use of the Supercars team to support his own Australian interests, which include the Western Star, MAN and MTU Detroit Diesel businesses.

Penske says he’s been pleased with the growth of his Australian businesses and their integration with the race team, but admits that there remains work to do in order to improve on-track performance.

DJR Team Penske remains without a win since Penske’s takeover at the end of 2014, while lead driver Fabian Coulthard is just 12th in points ahead of Bathurst.

“I would give the guys running our business an A,” he said.

“We’re probably somewhere between a C and a B- on our performance at this point.

“I think as you see us inch by inch (moving forward) and our performance yesterday, I feel really good about both the racing side and the business side.”

Penske meanwhile heaped high praise on the Mount Panorama Circuit after lapping the course with Dick Johnson in a Ford Falcon XR8 road car this morning.

“We have circuits over in the US but nothing like this from a road course perspective.

“The walls on both sides, there’s (no room) for mistakes.

“The elevation changes are amazing and to think of the speeds through the blind corners, it’s amazing.

“I take my hat off to these drivers and it’ll be interesting to see how we do tomorrow.”