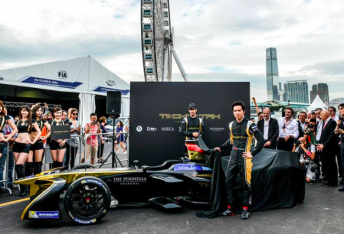 Ma Qing Hua topped the times in shakedown as the new FIA Formula E season kicked off on the streets of Hong Kong.

The Techeetah driver emerged as the surprise pacesetter posting a session best 1:08.66s at the newly constructed 1.8km circuit.

“I am really happy to race here as a home race and as a great location to have the Formula E Championship here,” said Ma.

“I just did a track walk in the morning and the track is very exciting for the race and there are a couple of overtaking points. In the race there will be lots of changes and possibilities.”

The sister Techeetah, sporting a new livery, of Jean-Eric Vergne backed up Ma’s pace in fourth just 0.8s adrift of the pace.

Nico Prost was fifth fastest despite causing a red flag when his Renault e.dams entry came to a halt on the circuit.

The 20 car field will be split into four groups for qualifying ahead of Sunday’s race.