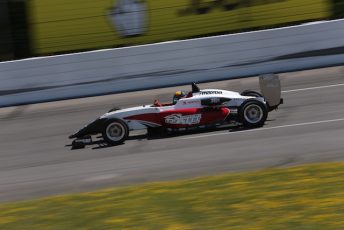 Matthew Brabham returns to the Indianapolis Motor Speedway this weekend to test the 2017 USF2000 chassis for Cape Motorsports with Wayne Taylor Racing.

As he continues to try and break into a full-time drive in the IndyCar Series, Brabham remains a key factor in the annual Chris Griffis Memorial Mazda Road to Indy test.

It will be the first time Brabham has driven the Tatuus USF-17 chassis on a road course after he was engaged by MRTi promoter Dan Andersen to drive the car at the Lucas Oils Speedway in Indianapolis.

The 22-year-old Brabham made his maiden IndyCar Series start at the Angie’s List Grand Prix of Indianapolis (16th) and later in the Indy 500 (22nd) in May.

The third generation racer won an Indy Lights race on the Indy road course in 2014.

“To head back to the Speedway again brings back some great memories from May,” Brabham said.

“I appreciate the opportunity being presented to me by the Cape brothers in association with Wayne Taylor Motorsport.

“While it’ll be fun to get myself back in the Tatuus USF-17, the focus will be shaking the car down, arriving at a baseline setup and bringing Oliver (Askew) up to speed.

“Anything at Indy is cool, but the road course is enjoyable.

“We got to lay down some of the quickest laps of the weekend in the Pirtek Team Murray IndyCar in May and of course I’ve won there in the past.

“Any track you win at is always one of your favorites.”