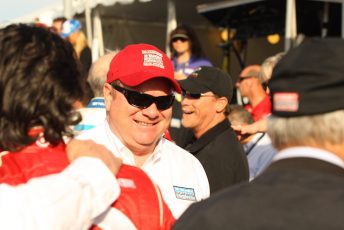 Chip Ganassi will return to Honda engines next season after a brief association with Chevrolet.

Ganassi’s most successful eras have seen it lift nine IndyCar titles with Honda engines, winning four CART titles from 1996-1999 and again from 2008-11 in IndyCar.

The multi-year agreement comes as the champion squad runs without Target sponsorship next year for the first time in 27 years.

“We’ve had a long and successful relationship with Honda over the years and we look forward to getting it back on track,” Chip Ganassi said after running Chevrolet power for the past three seasons.

“I feel a little like I am going home after having previously spent 12 years with them. Much of our organisation’s success has been with Honda power in our cars, so we are all very excited.”

Of the team’s 102 IndyCar victories, 77 have been with Honda powerplants.

“The Honda-Ganassi association is one of the most successful in the history of Honda’s North American racing programs,” Art St. Cyr, president of Honda Performance Development, said.