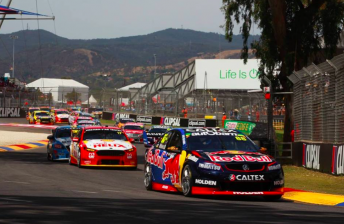 The Clipsal 500 will return to a two-race format

The Clipsal 500 Adelaide will return to its original format of two 250km races next year.

The move has been confirmed by South Australian Tourism Minister Leon Bignell, who is at Bathurst as part of the Clipsal 500’s sponsorship deal with Lucas Dumbrell Motorsport.

The change received a mixed response, with many critical of altering what was a highly popular and physically demanding format for the drivers.

“For the past three years we’ve had two races on the Saturday,” said Bignell at Bathurst.

“We think that’s what the fans really like and the drivers are really delighted with it.”

The Clipsal 500 is the primary sponsor of LDM’s #222 Holden for Bathurst, the Gold Coast and Pukekohe, utilising South Aussie and reigning Clipsal 500 winner Nick Percat to promote the 2017 event.

The SA Government has, however, also agreed to back Swiss Simona de Silvestro’s entry into the Supercars Championship next year.

Bignell says the move is part of his government’s overall strategy of pushing female sport.

“As a government we want to see women in sport and really promote it,” he said.

“We’re doing it across the board. We’ve just put $10 million for women’s sport into this year’s state budget.

“We want to get girls and young women who come to the track to aspire to be racing drivers or mechanics or engineers.

“We want to see some more equality there on the track as well as in the pits.”