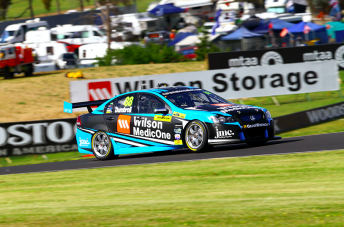 The Eggleston Motorsport driver made the most of a strong start to jump pole-sitter Garry Jacobson to the lead on the opening lap, which he held until pitting under the Safety Car on lap 10.

The early visit to the pitlane forced Dumbrell into a two stop strategy which proved to be a smart move.

After strong middle stint and a short fuel stop, Dumbrell eventually returned to the lead on lap 37 of 41 as the field completed their pit stops.

The Dunlop Series veteran, who had earlier built up a 7.5s lead, went on to take the victory by 11.3s from Jacobson, while rookie Anton De Pasquale provided an impressive drive to third.

Dumbrell’s victory didn’t arrive without issue as an electrical problem hampered him in the early laps, before a fan managed to tap into his radio frequency during the race.

A second place finish for Jacobson boosted his championship lead as he mirrored Dumbrell’s pit strategy following a slow start that dropped him third.

A strong surge in the final laps saw Jacobson snatch second spot at The Chase from De Pasquale, who found himself in a strong position after electing to pit twice under the Safety Car.

De Pasquale managed to stretch his fuel to the finish to take third, his best result to date in the Dunlop Series.

The maiden podium came after a mid-race crash at Murrays corner when he made contact with Kurt Kostecki while fighting over the fringes of the top 10.

However, the most dramatic moment of the encounter came when rookie Jack Smith suffered a high speed crash at The Dipper that brought out the Safety Car.

The Paul Morris Motorsport driver locked up at the Esses which fired him hard into the inside wall and then across the track into the outside wall, severely damaging his Falcon.

Luckily the 17-year-old Smith was able to walk away from the incident to the medical car.

Garry Rogers Motorsport driver Richard Muscat came through to finish a strong fourth ahead of Shae Davies, who led the the race until his final stop in latter stages.

Todd Hazelwood was left to rue a stall in pit lane that robbed him of a likely podium chance as he finished in sixth.

The Matt Stone Racing driver would have rejoined close behind Dumbrell if he hadn’t been slow away from the pits.

Jack Le Brocq was unable to make a one stop strategy pay off in seventh after choosing not to pit under the Safety Car.

The top 10 was completed by Andrew Jones, Macauley Jones and Taz Douglas, who shared his Eggelston Motorsport Commodore with Grant Denyer.

Meanwhile, James Golding’s rough weekend continued with a retirement when he clouted the wall with his front right at McPhillamy on lap six.

The Garry Rogers Motorsport driver, who crashed the GRM #34 Volvo in Practice 2 on Thursday, wrecked his front right suspension.

“It was not what we wanted,” said Golding, who was holding ninth spot at the time of the crash.

“I got a bit of aero wash from the car in front and hit the wall. I’m really disappointed for the team but hopefully we can have a better day tomorrow.”

Chelsea Angelo finished two laps down in 20th after an eventful afternoon.

The Matt White Motorsport driver made contact with Matt Chahda that bent her steering early in the race, before then receiving two drive-through penalties for pitlane infringements.

Jacobson has opened up a 151 point lead over Le Brocq ahead of the Dunlop Series finale at Sydney Olympic Park from December 2-4.