Armor All to continue for 13th Supercars season

Armor All to continue for 13th Supercars season 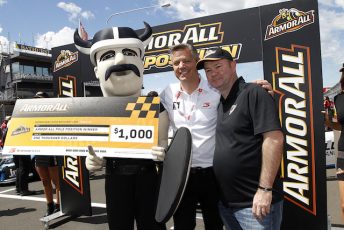 Armor All has agreed to continue is association with the Pole Award for a 13th season by signing up for the Virgin Australia Supercars Championship for 2017.

The continuation solidifies the car care giant as the longest serving official sponsor in the series.

Confirmation came from Mark Skaife, the first winner of the Armor All-backed pole award during the Top 10 shootout for this weekend’s Supercheap Auto Bathurst 1000.

Armor All has award more than $1 million in prizemoney through the pole award association which extends to every round in the championship.

Supercars chief executive James Warburton said that award had become a valuable component in the series.

“Since 2005, Armor All has been a critical part of the Virgin Australia Supercars Championship,” Warburton said.

“The Armor All Pole Award is a valuable target for all of our drivers at every round of the championship and we are delighted to have Paul Blair and his Armor All team with us again next season.”

Paul Blair, general manager of Spectrum Brands Global Auto Care Asia Pacific, said the association has become one of the most easily recognised sponsorships in the sport.

“Armor All stands for high quality and performance, just like the Supercars Series,” Blair said.

“With an exciting new grand final coming up in Newcastle, a return to New Zealand, new activations and the support from the fans – who keep their own cars looking great with Armor All, we can’t wait for the 2017 Supercars Championship.

The three new names added to that list in 2016 include Scott Pye, Cameron Waters and Chris Pither.