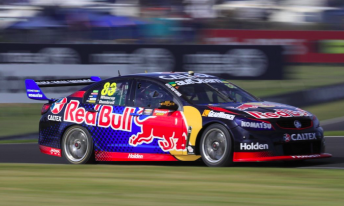 The Red Bull driver demoted Chaz Mostert from the top of the order with two of the 40 minutes remaining, recording the fastest time of the weekend to date with 2:05.048s.

McLaughlin and Tim Slade demoted Mostert to fourth in the dying seconds, falling 0.10s and 0.14s short of Whincup respectively.

“New tyres on a good car at this place lets you know you’re alive, that’s for sure. The car is obviously in the window.

“I thought we were going to go quicker but the sun came out which heated the track up.

“But the number doesn’t mean anything, it’s all about the position and I’m very happy to be on provisional pole.”

Whincup had set the early pace before the red flags flew 14 minutes in when Shae Davies beached his Erebus Holden at The Chase.

Mostert, Winterbottom and McLaughlin all eclipsed Whincup in the brief period of green flag running before a second red flag, this time for Simona de Silvestro.

The Swiss also came unstuck at The Chase and, like Davies, was forced to sit out the remainder of the session under the red flag rules.

“I didn’t do a clean job but the car wasn’t perfect either,” said Lowndes.

“I think between all of us we didn’t get the best out of it.

“But we would have struggled to get in the top 10 to be honest, we’ve been struggling with the car all weekend.

“We made a change for that session which made it nervous in the rear across the top and that doesn’t give you confidence.

“I actually smacked the wall on that last run trying to get everything out of it.”

A final practice session will take place at 1010 tomorrow ahead of the Top 10 Shootout at 1710.