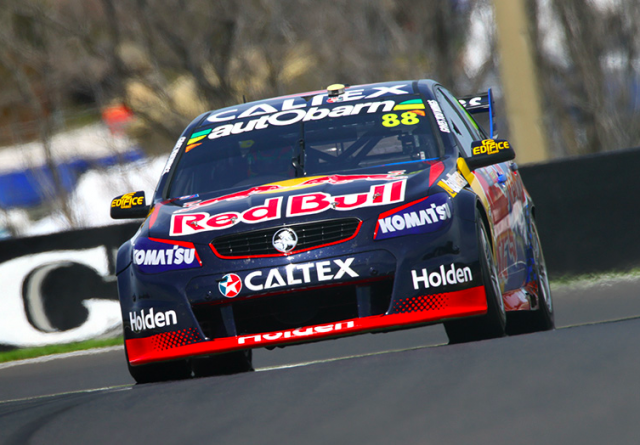 Jamie Whincup returned the #88 Red Bull Holden to the top of the order in the final session ahead of qualifying at the Supercheap Auto Bathurst 1000.

Whincup’s qualifying simulation run netted a 2:05.15s, 0.24s shy of the practice record he set in the corresponding session 12 months ago.

The Red Bull ace set his time with six minutes remaining, after which Prodrive’s Mark Winterbottom and Chaz Mostert both put down their best efforts.

Winterbottom fell 0.16s short aboard The Bottle-O entry, while Mostert narrowly improved his own previous effort but could not lift himself from third.

“I think we’ll have to be in the 2:04s to get provisional pole,” noted Winterbottom.

“At the moment we’re doing the hard parts of the track fast, but down the bottom we need to tidy up a bit of instability under brakes.

“If we can improve that without losing our strengths we’ll be very strong.”

Scott McLaughlin slotted his Volvo into fourth ahead of Shane van Gisbergen and Tim Slade in a top six that was separated by just 0.25s.

Craig Lowndes’ difficult weekend continued in 12th, while Michael Caruso was the fastest Nissan in 13th.

Nick Percat was 20th after escaping significant damage when he ran wide and clouted the wall at The Dipper mid-session.

The #222 Holden was inspected in the Lucas Dumbrell Motorsport garage before returning to the track and recording its 2:06.66s best.

“I lost the rear and there was nowhere to go,” recounted Percat of the incident.

“I tried to keep it off the wall but it just tagged the rear and spun it around.

“It was fortunate that it spun so I wasn’t straight in at The Dipper.

“I think the mountain has been kind to me.”

The 40 minute qualifying session will commence at 1550 local time.