A wrap of the opening day of the Bathurst support races including TCM, Utes and the Toyota 86 Series.

Seton kept pace with the Torana before Bowe was badly baulked by back-marker Sean Fowler entering Mountain Straight on the penultimate lap.

The twice Australian Touring Car champion did not waste the opportunity as he gapped Bowe to take his second Touring Car Masters race win at Bathurst, again in a #30 Ford.

Adam Garwood made the line in 11th after an audacious outside move on Johnson at Griffins failed to pay dividends on the final lap, the 17 year old spinning his Capri and backing into the wall.

Eddie Abelnica climbed from the rear of the 48-car grid to 25th after missing practice due to illness. 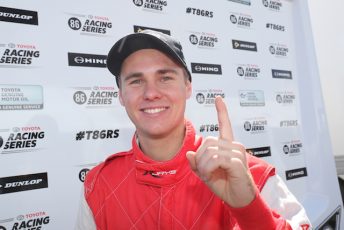 Aaron Seton was credited with pole position after qualifying was declared a non-result due to a Haydn Clark crash.

Clark suffered a tank-slapper through Skyline and found the inside wall, causing a red flag.

The session, already shortened due to the fog-delayed start, did not resume, leaving barely half the field with a lap time on the board.

The grid for tomorrow’s first of two 6-lap races, starting at 0835 and 1230 AEDT, thus reverted to practice results.

The Gold Coaster made a good start before the field soon come under control of the Safety Car.

Peter Burnitt and Nandi Kiss necessitated the yellows when the former tagged the latter on the run to the Cutting, both making contact with the wall.

Racing resumed with two laps remaining, the front-runners proceeding as you were as Harris led Nathan Pretty, David Sieders, and Jeremy Gray to the line.

Craig Woods escaped with his Falcon largely intact when he grazed the wall on the way into the Cutting on the penultimate lap, finishing 12th.

Jack Elsegood’s nightmare return to the series continued when the 2009 champion broke the left-rear shock absorber.