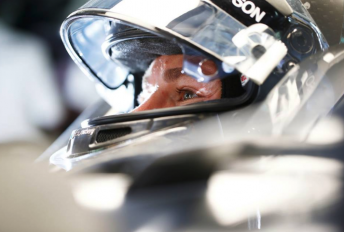 Nico Rosberg held sway at Suzuka, topping both practice sessions for the Japanese Grand Prix ahead of his team-mate Lewis Hamilton.

The German continued his purple patch of form by laying down a best of 1:32.25s in Practice 2 before the majority of the field settled into long runs.

The Brit had earlier shaded Rosberg on hard tyres.

Earlier in Practice 1, Rosberg had shaded Hamilton by 0.21s as Mercedes began solidly following their indifferent results at the recent Malaysian Grand Prix.

Vettel was fifth ahead of the Force India pair of Sergio Perez and Nico Hulkenberg.

Fernando Alonso put the McLaren-Honda in eighth ahead of Valtteri Bottas (Williams) while Carlos Sainz completed the top 10.

The Virtual Safety Car was deployed mid-session for the stricken Haas of Esteban Gutierrez who parked the Ferrari-powered machine near the Degner Curve.

It was later believed to be a turbo issue that curtailed the Mexican’s run.