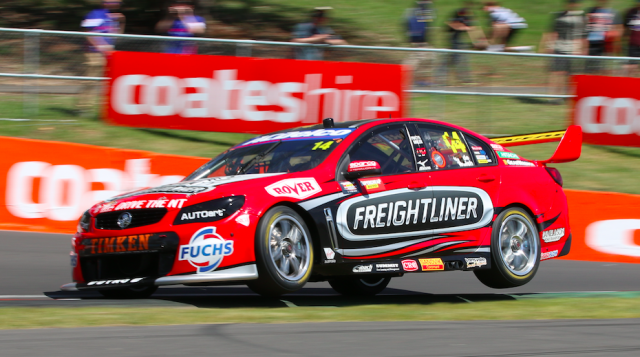 The Freightliner Holden through The Esses

Tim Slade set the third fastest time in qualifying for the Supercheap Auto Bathurst 1000 despite early issues inside the Freightliner Holden.

An electrical problem saw the South Australian driving without anti-rollbar or brake bias information on his dashboard for much of the 40 minute session.

The combination of the issue and the need to chase car balance during the early runs caused frustration for the two-time Supercars race winner.

Despite the circumstances, Slade repeatedly proved one of the fastest in the field throughout the session, eventually ending up third on 2:05.19s.

“I lost my anti-rollbar and brake bias numbers on the dash,” Slade confirmed to Speedcafe.com.

“Around here I change the bias quite a bit around the lap.

“The guys manually calculated it (the bias position) off the front-to-rear brake pressure split numbers so that they could give me a reference to start the lap.

“Then I had to remember where I was with the bias relative to that throughout the lap until the numbers came back later in the session.

“We had some other stuff going on as well with some random feelings that I was getting from the car that I hadn’t had in the previous sessions.

“We’d taken the same set-up from Practice 5 into qualifying but the balance was a bit different which was costing us time.

“We had to try and figure that out and having the other stuff to sort out wasn’t helping.

“It (the frustration) was a combination of a few different things.

“It’s qualifying at Bathurst, you get a bit wound up.”

Slade described his best lap as “pretty messy across the top”, leaving room for improvement as he chases pole in tomorrow’s Top 10 Shootout.

Encouragingly, the Freightliner Holden of Slade and co-driver Ash Walsh has been inside the top 10 throughout all six sessions held to date.

It continues strong Bathurst form shown by the #14 entry in recent years, despite the departure of former drivers Fabian Coulthard and Luke Youlden and engineer Phil Keed to DJR Team Penske.

“The BJR cars have always been pretty speedy around here and this week, you wake up Monday morning pretty anxious, hoping that will continue,” said Slade.

“Thankfully it’s been the case. It’s the best car I’ve ever had here and really enjoyable to drive.

“It rolled out in the window and we’ve just been using the tools in the toolbox to tune it.

“So far we’ve been working on our qualifying car, so we’ll see what it’s like over the longer runs tomorrow.

“But typically it’s been good as a race car and particularly at Bathurst.”