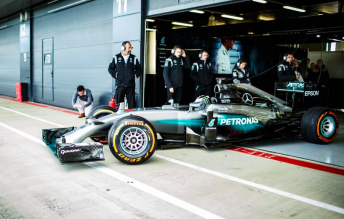 Jorge Lorenzo enjoyed a run in the Mercedes W05

The Yamaha rider jumped behind the wheel of the W05 at Silverstone in a special test organised by Monster Energy, which sponsors Lorenzo and the Mercedes F1 team.

Three-time MotoGP world champion Lorenzo is no stranger to four wheels after piloting a Ferrari 458 GT3 in the Gulf 12 Hours in 2014.

The Spaniard has also tested a GP2 car and made an appearance in the 2012 Race of Champions event.

Lorenzo, who piloted several cars to familiarise himself before the test, admitted the run was ‘a dream come true’.

Mercedes elected not to release any lap times from Lorenzo’s test.