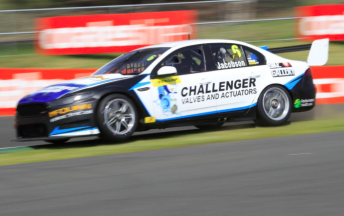 Garry Jacobson will start the Dunlop Series 250km mini enduro from pole position after an impressive display in an interrupted qualifying session at Mount Panorama.

The Prodrive Ford driver climbed to the top of the times at the halfway point when he posted an impressive 2:06.53s effort, resetting the category qualifying lap record in the process.

Shortly after his lap the session was red flagged with eight minutes remaining after Matthew Palmer’s Ford Falcon caught fire.

Palmer lost control through McPhillamy Park resulting in a heavy hit with the wall.

Flames erupted from the right rear corner of the car which forced him to stop at Skyline where he climbed out of the cockpit. 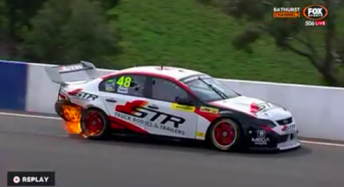 Qualifying resumed after marshals cleared the debris from the incident, but the order remained unchanged to the chequered flag.

Macauley Jones and Shae Davies will share the second row having both enjoyed brief spells at the top of the times.

Garry Rogers Motorsport’s James Golding was fifth fastest ahead of title contender Jack Le Brocq, who struggled to match his Prodrive team-mate Jacobson, ending the hit out 0.6s adrift of the pace.

The 41-lap Dunlop Series 250km encounter  is scheduled for Saturday at 1405 local time.