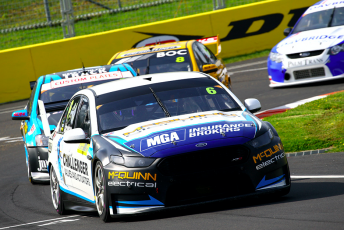 The Prodrive Ford driver moved to the top of the times with 15 minutes remaining as he became the first man into the 2:06s bracket.

Jacobson went on to improve his time to a 2:06.83s which proved to be just 0.0054s quicker than Eggleston Motorsport’s Paul Dumbrell, who shot to second late in the session.

Just eight thousandths of a second separated the top three with Jack Le Brocq third in the second Prodrive entry.

Le Brocq had topped the standings for much of the hit out before times began to tumble.

Todd Hazelwood was seventh fastest despite ending the session in spectacular fashion.

The South Australian lost a right front wheel on his Commodore which sent him firing into The Chase gravel trap after the chequered flag flew.

“I just did a personal best sector, and as I entered the Chase I had a massive vibration as I was going through the right-hander, and then as I’ve got on the brake the car’s locked up and all of a sudden I’ve seen the wheel go past me,” Hazelwood told Speedcafe.com.

“I was just hanging on, hoping that the rear didn’t go sideways into the gravel because we all know what happens when you do that, so it was quite lucky I think that we actually went into the gravel trap head-on.

“It’s not ideal but we’ll press on, get the car out for qualifying, and hopefully nothing goes wrong and we can keep all the wheels on the car.

“We’ll investigate it and figure out what happened. I’m sure the team, Matt Stone Racing, will be on top of it.”

The top 10 was completed by teenager Bryce Fullwood, Shae Davies and Richard Muscat.

Chelsea Angelo impressed in 16th position along with rookie Jack Smith in P21.

Kean grazed the wall at Reid Park in his Brad Jones Racing Commodore, while Kostecki ran wide at McPhillamy before glancing the wall with his right front.

Liam McAdam was absent for Practice 2 after Eggleston Motorsport elected to withdraw the car from event following a crash at The Dipper in Practice 1 yesterday.

Heavy contact with the inside wall severely damaged the chassis which is unable to be repaired at the track.

Ryal Harris suffered an mechanical issue restricting him to just two laps as he finished in 22nd spot.

The Dunlop Series field will return to the track for qualifying at 1505 local time.