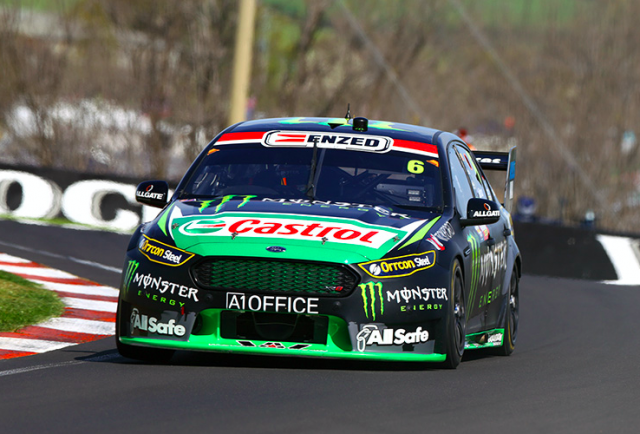 The Fords of Jack Le Brocq and Luke Youlden went one-two in Practice 4 at Bathurst, ending Red Bull’s run at the top of the timesheets.

On the day that Ford will shut its Australian manufacturing operations, Jack Le Brocq put the Blue Oval on top in the 60 minute co-driver session with a 2:05.95s best.

Dumbrell had appeared set to keep the #88 Holden on top for the fourth straight session, bumping Prodrive’s Dean Canto from first place with 2:06.01s four minutes from the flag.

Le Brocq then went 0.055s quicker with 90 seconds on the clock, becoming the first co-driver to break into the 2:05s bracket this weekend.

“I’m still trying to learn the car and work it all out and understand how the guys set these cars up compared to our Dunlop car.”

“Phil (Keed, engineer) put me under pressure by giving me one lap on the tyres,” smiled Youlden.

“The exciting part is that there’s definitely more time left in it.”

Watching Dumbrell throughout the session, primary driver Whincup said that the duo were still working on finding a comfortable balance in the Red Bull Commodore.

“We’re trying to get it quick, find a good race car and have it comfortable at the same time,” he said.

“At the moment it’s quick but probably not the best to drive, so if we can find both we’re in a good place.”

“We need to find some pace, but as a race package we’re quite comfortable,” said Lowndes.

“The next session will be really important for us ahead of qualifying.”

All 27 cars took to the track, including the #34 James Moffat/James Golding Volvo that was repaired overnight following its Practice 2 accident.

Golding had an early trip through the grass at the high-speed McPhillamy Park before settling down and eventually clocking the 14th quickest time.

“The boys did a great job repairing the car last night,” said Moffat, who had to sit out Practice 3 due to the damage.

“Fortunately the damage wasn’t too bad, it was just bolt on stuff and nothing structural so the boys didn’t have too late a night.”

Russell Ingall gave Nissan Motorsport a scare by tagging the right-side wall on the run into The Dipper, just as James Courtney did in opening practice yesterday.

The veteran subsequently pitted the #15 Altima reporting a vibration but returned to the track a short time later and ended up 22nd in the order.

Just 1.7s separated the top 26 co-drivers, while Renee Gracie was a further 1.7s away from the pace in last place.

The primary drivers will return to the track at 1135 local time ahead of qualifying from 1550.