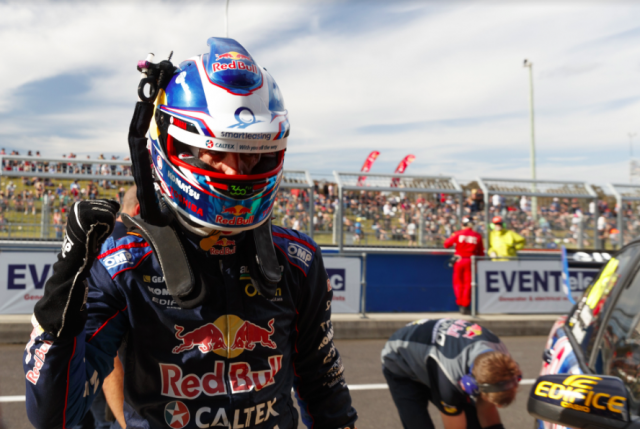 Drivers expect that they’ll have to be on record setting pace in order to score the Armor All Pole Award in tomorrow’s Top 10 Shootout at Bathurst.

Jamie Whincup’s 2:04.91s best from Practice 5 last year is yet to be beaten during the weekend to date.

Whincup came closest to his own benchmark in this afternoon’s qualifying, clocking 2:05.04s to edge out Scott McLaughlin by 0.10s.

Last year’s Friday qualifying was postponed to Saturday due to Chaz Mostert’s crash, with the session and Shootout both subsequently hit by wet weather.

“You have to assume that it’ll cool down later in the afternoon,” said Whincup of the Shootout, which will commence at 1710 local time.

“We’ll be going for pole assuming that’s the case (that a 2:04s is required).

“I’ve been on the receiving end a couple of times here with rain just before I’ve gone out.

“I’ve had some ordinary runs here so hopefully it’s kind to me.

“I think everyone (will be a threat), they’re all quick on their day, it’s just a matter of who gets it right on that one lap.”

Setting his own fastest ever lap of the mountain in a Supercar to be third in qualifying, Tim Slade concurred with Whincup’s prediction of a record in the Shootout.

“Being cooler it will be faster, so I’d be surprised if it wasn’t in the 4s,” he said.

“It’d be a nice personal milestone to have a 2:04s around the mountain.

“I was thinking that this is the fastest I’ve ever been around here, but I went quicker in the GT car (Objective Racing McLaren) at the 12 Hour.

“Those cars are mental, but to do a 2:04 in a Supercar would be pretty cool.”

“It’d be epic to get pole here, it’s the best pole of the year,” said McLaughlin, who will be the penultimate man to run in the Shootout.

“We’re all after the win on Sunday, but pole would be something that you’d never forget.

A final practice session will take place at 1010 tomorrow ahead of the Top 10 Shootout at 1710.