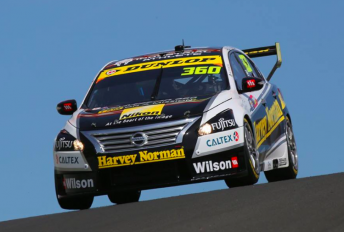 Simona de Silvestro remains positive on her Mount Panorama progress despite a setback in qualifying at the Supercheap Auto Bathurst 1000.

De Silvestro and co-driver Renee Gracie will start Sunday’s race 26th after a mistake from the Swiss early in qualifying.

A brake lock-up on the entry to The Chase saw de Silvestro spear into the gravel trap, triggering the red flags.

The error came on what would have been a new personal best lap time with data suggesting that the former IndyCar driver would have moved into the 2:07s bracket.

Earlier in Practice 5, she surpassed her times from Thursday by posting a 2:08.70s which was 3.55s off the front-running pace.

“I just locked up the left front and I couldn’t stop so it was a mistake, but I’m still learning how to drive the car and to push on the new tyre.

“It is annoying for the guys but it could have been worse. I have learned my lesson.

“It would have been cool to have that lap in there but we know that we are getting closer.

“We could have been within two seconds of (Michael) Caruso which was the fastest Nissan.

“I think that is positive and it is cool to see that every time I’m in the car I’m improving which is a really big plus.

“The car is pretty comfortable. I feel good in the car but I need to improve.

“There is a tenth everywhere that makes up two seconds around here. I just need to clean up these things.”

De Silvestro is confident that the #360 Harvey Norman Supergirls entry can run with the back of the field on Sunday.

“For me I want to be consistent and quick and on my lap times which is where I am going to focus on,” she added.

“Maybe we will get to fight with a few guys at the back because we are getting close. We have to make no mistakes.”