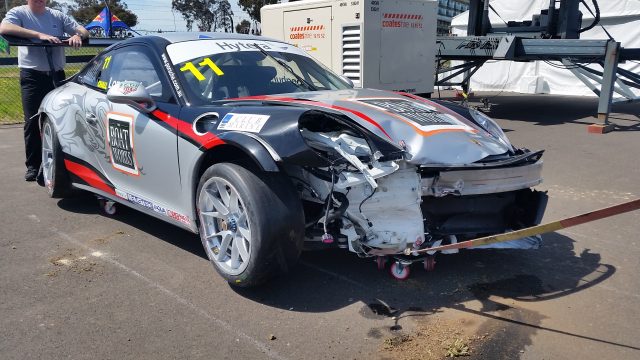 Heavy damage to Longhurst’s Porsche has ended his weekend

Tony Longhurst’s debut in the Carrera Cup series is over after a heavy crash in qualifying at Mount Panorama.

Longhurst lost control of his Porsche in the Esses, slamming into the inside wall head-on.

The front of the car bore the brunt of the damage as the double Bathurst 1000 winner tired to drive the car further down the track before eventually parking it at the top of Conrod Straight.

“I was on a lot better lap than I was on the previous one,” Longhurst explained to Speedcafe.com.

“I came over Skyline just a touch fast then when I hit the kerb I lost control of the car. It’s very disappointing because I wanted to do the whole weekend.

“I was driving fast and I was comfortable but I was just trying too hard.

“The Cup car reminded me of the old BMW M3 DTM car I used to drive. It was awesome so I’m gutted that I can’t run in the races but I did it to myself.”

The crashed ended qualifying with around 90-seconds still to run with Matt Campbell scoring his sixth-straight pole position to equal the consecutive pole sequence of Jim Richards in 2003. 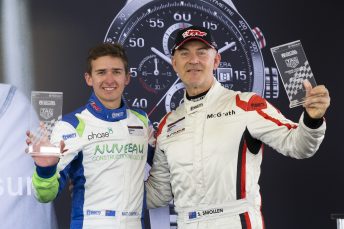 Campbell and Smollen with their pole awards

The first three positions on the grid will be occupied by double-duty drivers with David Wall starting second and Steve Richards third.

Dean Fiore, who late yesterday crashed in the same area as Longhurst, returned to the track for qualifying and set the 13th fastest time.

An impressive performance from Tag Heuer Carrera Challenge driver Shane Smollen saw him set the fastest time in the semi-professional category as he took ninth overall of the 22 cars which took part in the session.

The opening race of the Carrera Cup is set down for 2.25pm.