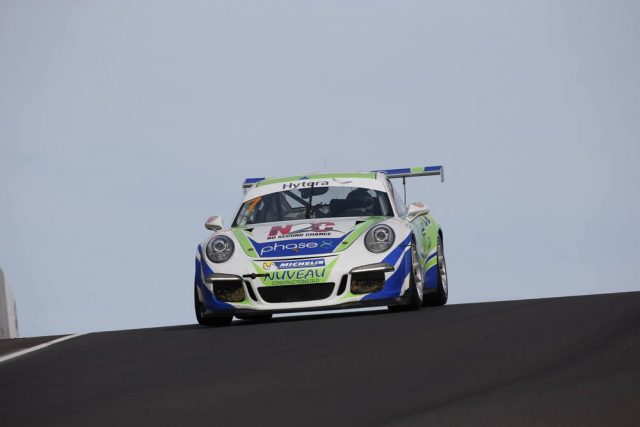 Campbell takes the win in Race #1 at Bathurst

Matt Campbell has returned to winning form in the Carrera Cup with a classy drive to take the opening race of the weekend at Mount Panorama.

Despite starting off pole, Campbell had to slip in behind David Wall after a side-by-side run up Mountain Straight on the opening lap.

He sat in behind heading into Hell Corner on just the second lap, when Wall got loose. Campbell pounced and out-dragged Wall up Mountain Straight and assumed the lead.

From that point Campbell was able to control things at the front while Wall’s attention switched to a determined Steve Richards.

Despite his error on the second lap, Wall kept his composure over the next seven laps to hold onto the position behind Campbell.

The race was relatively clean with the major incident occurring between Tag Heuer Carrera Challenge points leader Tony Bates and James Abela on lap #3. Bates was sent spinning into the Griffin’s Bend fence after contact. Abela finished the race in 12th position, while Bates was 20th and sixth in the semi-professional class.

Officials have confirmed that they will be reviewing the incident.

Victory in the Tag Heuer Carrera Challenge going the way of Shane Smollen ahead of James Bergmuller and Stephen Grove.

The second race of the Carrera Cup will be Saturday afternoon at 4.30pm.