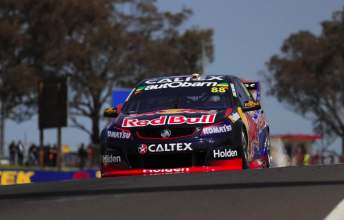 Jamie Whincup secured a sweep of the Thursday sessions for the #88 Red Bull Holden by edging out DJR Team Penske’s Fabian Coulthard in Practice 3 at Mount Panorama.

The six-time champion’s time was 0.18s clear of the marker that Coulthard set to top Thursday practice last year aboard the #14 Brad Jones Racing Holden.

“It’s a bit early to be going quick but we have a good car,” said Whincup.

“The car is quite balanced but the track is forever evolving so we’ve got to keep reacting.

“We put new tyres on just to get a gauge on what the car was doing ahead of tomorrow.”

“We stuck to the plan because it’s quite easy to get lost here chasing the track,” said Coulthard.

“We’re still not happy, but it’s not a bad position to be in.”

Prodrive’s Chaz Mostert jumped 14 places with his final lap to be third ahead of Scott McLaughlin’s Volvo.

The result proved a strong turnaround for Mostert, whose day began with a vibration in Practice 1, while McLaughlin was less pleased with his Volvo.

“It’s all over the place but we’ll fix it up overnight hopefully and get it done tomorrow.”

Van Gisbergen’s session included a 15 minute stint in the garage while the Red Bull team attended to a brake issue on the #97 Holden.

Just 26 cars took part in the session, with Garry Rogers Motorsport unable to repair the #34 Volvo that James Golding crashed in Practice 2 in time to return to cut any laps.

The car will return to the track with Golding at the wheel for Practice 4 at 0855 local time tomorrow.