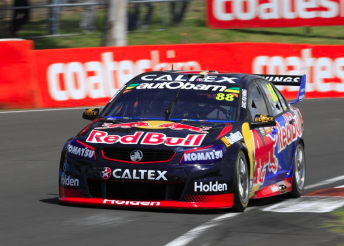 Jamie Whincup set the pace in opening practice at the Supercheap Auto Bathurst 1000, despite bringing out the red flags with an early spin.

The Red Bull ace made an uncharacteristic mistake just prior to halfway in the 60 minute session, locking his rear brakes into Murray’s Corner and spinning into the gravel.

Extracted under red flags, Whincup continued his practice program before shooting to the top of the order with 2:05.95s just two minutes from the chequered flag.

The time was 0.4s quicker than the quickest achieved in Practice 1 last year.

“The track feels pretty clean, it hasn’t deteriorated too much from last year and the car was there or thereabouts,” said Whincup.

“Obviously everyone will go quicker when they put some tyres on and the track rubbers up a bit more.”

Fabian Coulthard ended up 0.56s adrift in second after briefly moving to the top prior to Whincup’s effort. McLaughlin had been fastest before handing over the #33 Volvo to his co-driver for the final minutes.

“It’s always good to have a nice car out of the truck,” smiled McLaughlin.

Scott Pye endured the session’s wildest moment with a high-speed spin through McPhillamy Park at the 25 minute mark.

The #17 DJR Team Penske Ford speared backwards through the gravel before bouncing off the tyre wall, leaving Pye to cruise back to the pits with cosmetic damage that ruled him out of the remainder of the session.

“I came across the crest into McPhillamy and just lost the rear,” explained Pye.

“If you go into the gravel sideways it slows you down but I hit the wall pretty hard.

“Fortunately we’ve gotten away with it, but there’s plenty of damage.” All three Triple Eight Holdens also tasted the scenery, with Craig Lowndes and van Gisbergen surfing through the gravel at The Chase in separate incidents.

Lowndes, the defending race winner, ended the session down in 23rd place.

James Courtney survived a small early scare upon his return to Bathurst after missing the race with injury last year.

The #22 Holden Racing Team Commodore made minor contact with the right-side concrete on the entry to The Dipper before pitting and handing over to co-driver Perkins.

“It was just the tiniest little kiss,” said Courtney.

“I’m just finding the limits… it’s a couple of years since I’ve been around here so I’m a bit rusty.

“It’s one of those places that is a bit daunting initially with the weight of the car and the speed across the top of the hill.

“But I’m not going to lie. It was pretty hairy there for the first couple of laps.” 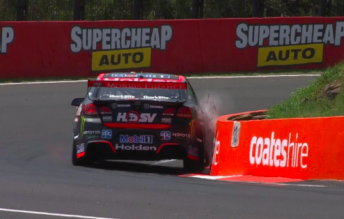 Courtney clipped the wall on the way down the hill

It took more than 45 minutes for Rick Kelly to complete his first flying lap after his crew was forced into replacing the tailshaft in the #15 Altima.

“Rick went out and said ‘if I keep driving this thing we’re not going to have anything left’,” quipped co-driver Russell Ingall of the extent of the vibration.

Chaz Mostert completed three flying laps before pitting the #55 Supercheap Ford with a similar issue, spending the remainder of the session in the garage.

A dedicated practice session for the co-drivers will get underway at 1305.