John Bowe topped practice the opening day of practice for the Trans-Tasman Challenge at the Supercheap Auto Bathurst 1000.

Glenn Seton, fastest in Practice 1, spent most of the second session in the same position before Bowe lifted late.

The twice Bathurst 1000 winner ended the day over eight tenths clear of the field in his Torana SL/R 5000.

Defending series champion Dean Perkins was fastest of the visitors in 14th overall in his Falcon XD.

Qualifying will be held tomorrow at 0740 local time, with the opening race run over six laps from 1645.

Ryal Harris has qualified on pole for Round 6 of the V8 Utes at Mount Panorama.

The three-time series winner dominated both practice sessions before Nathan Pretty threw down the challenge in qualifying.

Pretty sat atop the timesheets as the chequered flag flew but Harris did just enough in his final lap to secure pole by 0.04s.

Mason Barbera heads up the third row alongside Jeremy Gray, having escaped a tense moment when his Falcon squirmed through the high-speed Chase.

Jack Elsegood will start Race 1 from the rear of the 23-car grid after mechanical issues plagued the 2009 series winner on his return to the series.

Terry Nightingale twice found the wall during the day.

The Bathurst local had a wild moment at the Esses during qualifying, snagging the kerb and spinning before finally making right-front contact with the wall at the Dipper.

He had earlier backed in at Griffins during Practice 1, while Kiwi Peter Ward slapped the concrete at Reid Park in Practice 2. 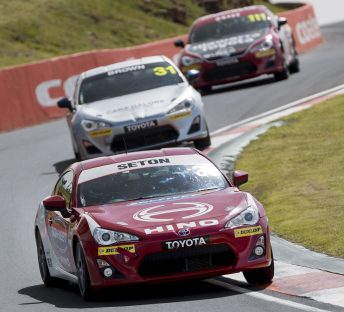 Aaron Seton set the pace in practice for the Toyota 86 Racing Series.

The third-generation racer went fastest after the chequered flag to edge David Sieders by 0.025s in Practice 1.

Sieders’ effort stood up for second on combined times despite being off the pace in the afternoon, ahead of Dylan Gulson, Will Brown and Steven Johnson.

The vast majority of the field set their personal best laps in the morning’s single-digit temperatures.

Brad Glasson produced the only notable incident of the day when he lost control at Skyline and ultimately found the outside wall head-on during the opening session.

Qualifying will take place tomorrow at 0820.