Supercars legend Mark Skaife believes Chaz Mostert will prove the biggest threat to Triple Eight this weekend, provided he can shake off the demons of his 2015 Bathurst crash.

Mostert returns to the Supercheap Auto Bathurst 1000 a year after a qualifying crash left him with a broken leg, wrist and damaged ligaments in his knee.

Sitting out the remainder of last season, Mostert remains winless since the accident but has shown impressive speed this year with five pole positions.

Skaife believes that Mostert and new-for-2016 co-driver Steve Owen are the ones to challenge Triple Eight, which heads into the weekend as heavy favourites with its three-car attack.

“I reckon they are the biggest threat,” Skaife told Speedcafe.com ahead of this morning’s opening practice.

“Steve Owen goes well here and if Chaz gets on to where he needs to be… his pace has been great.

“If you think about it, a kid that’s had an accident like that and his qualifying this year, it’s a fantastic resurgence.

“I don’t think he’ll have any drama coming back to Bathurst, but he will have to apply himself to make sure he’s in the right head space for it. 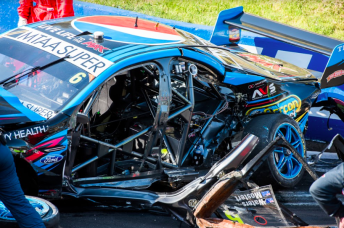 The aftermath of Mostert’s 2015 crash

“Anyone that says you don’t think about that shit when you arrive at the next race track has either never driven a race car or is kidding themselves.

“He’s done the 6 Hour, but it doesn’t help much when you’re doing 5mph (in a production car).

“The thing that is good about where he crashed (on the run to Forrest’s Elbow) is that it’s not a grip-limited part of the track, it’s effectively a straight.

“You’ve got to actually go and drive into that wall, it’s not like you’re sliding it up to the fence there fully committed.”

Winterbottom is now 340 points adrift of championship leader Shane van Gisbergen, but has a strong recent record at Bathurst that includes a win in 2013 and a second last year.

“I think he’s in a bit of a rut,” said Skaife of Winterbottom.

“If I was that team I’d be throwing tyres at it early (in practice) to give him some confidence.

“He needs to do a really good job this weekend to resurrect his championship.

“But I’m expecting his speed to be better. He’s very good here, he drives the car really well and flows the car nicely.”

Opening practice for the Supercheap Auto Bathurst 1000 gets underway at 1045 local time.