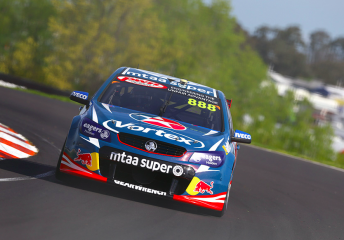 While Jamie Whincup and Paul Dumbrell topped all three sessions, it was a difficult opening day for the sister Triple Eight entries at the Supercheap Auto Bathurst 1000.

Craig Lowndes lost valuable running in Practice 1 after an error at The Chase saw him run deep into the gravel, damaging the splitter on his Triple Eight Commodore.

Lowndes’ mistake curtailed his running in Practice 1, while a limited hard tyre bank was later blamed for the car’s distinct lack of pace in Practice 3.

Lowndes admits the mistake cost the squad crucial track time to tune its set-up, but is confident heading into Friday’s practice and qualifying.

“It is always a blow but it is not going to be our downfall,” Lowndes told Speedcafe.com.

“We are in a good place now but we will have to work at it stronger and harder than everyone else.

“I think we are in good shape. The car in P3 was good but I didn’t extract the best out of it.

“We started outside the top 10 last year and we ended up winning it.

“The tyre quality going in wasn’t the best and we knew that.

“This year has mainly been a soft tyre year so we didn’t have many hard tyres left in the bank as we are a newly formed team.”

Championship leader Van Gisbergen was forced to spend 15 minutes in the garage during Practice 3 while the team replaced components to fix a knock-off issue.

The Kiwi did however manage to end Practice 3 in ninth, 0.6s shy of Whincup.

Team boss Mark Dutton believes the team has resolved the issue but says the squad will conduct a through investigation into the cause, which could be down to a warped brake rotor.

“We haven’t changed a lot (on the car since the problem occurred),” Dutton told Speedcafe.com.

“It was just a peculiar amount of brake knock-off so we played with a few things there and we got it right.

“But we have got to go through the data to try and understand what brought it on.

“It could be something as simple as a warped rotor at the end of a session.

“If you don’t cool the brakes sufficiently at the end of the session they can quickly warp.

“It didn’t look like a faulty brake disc. The cars are quite good as there are plenty of sensors to isolate the issues.

“We got it right in the end so there are no actual concerns but like anything you want to know what caused that.”