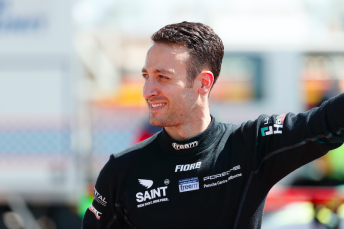 A heavy accident for Dean Fiore in second practice for the Carrera Cup has seen the Nissan Supercars co-driver sent to Bathurst Hospital for precautionary checks.

The crash occurred in The Esses on just the first flying lap of the session.

Fiore walked from the car to the ambulance and was assessed at the trackside medical centre before being taken to Bathurst Hospital.

The West Aussie’s crew were assessing the damage to the car post-session and are hopeful of it continuing on the track this weekend.

After David Wall set the pace in Practice 1, championship leader Matt Campbell was fastest in the second session that was shortened due to the clean-up of the Fiore Porsche.

Only Campbell and Wall were able to put in two flying laps in Practice 2.

Fastest in the Tag Heuer Carrera Challenge in both session was Tony Bates, who is in a re-shelled Porsche this weekend after a heavy crash at the last round at Sandown in Melbourne.

The Carrera Cup tomorrow has qualifying at 1010 local time followed by the opening nine lap race of the weekend at 1425.