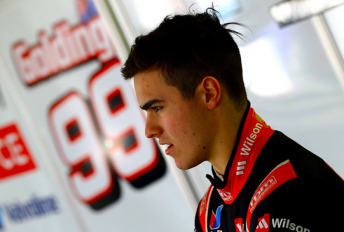 A last gasp effort from James Golding saw him edge Paul Dumbrell in opening practice for the Dunlop Series at the Supercheap Auto Bathurst 1000.

The Garry Rogers Motorsport driver shook off his Sandown 500 crash to post a 2:08.26s on his final effort which surpassed Dumbrell who led the vast majority of the  the 40 minute session.

Golding had been running inside the top 10 for the best part of the session before his late surge that pipped Dumbrell by 0.004s.

“The main thing for us is to get laps and keep improving,” said Golding.

“We weren’t focussed on being fastest, but the car felt really good out of the box.”

The Eggleston Motorsport driver, who will partner Jamie Whincup in the Bathurst 1000, heads to Mount Panorama in search of a third consecutive win in the 250km mini enduro.

Taz Douglas, who is sharing his entry with television personality Grant Denyer was sixth albeit a second shy of Golding.

The session ran clean until just before the halfway mark when Eggleston Motorsport driver Liam McAdam hit the inside wall at The Dipper which speared him to the outside of the track with damage to his Commodore.

Dunlop Series and Bathurst rookie Jack Smith made steady progress as he completed the session without an issue in 22nd position.