Dumbrell was 0.8s clear of the field when he set his time after 50 of the 60 minutes.

Golding slammed the left-side wall through the high-speed section, leaving the car to be returned to the pitlane on a flatbed.

Moffat expects that the damage will rule him out of today’s final practice session.

“It’s never nice when they come back on the flatbed,” he said.

“The guys will have to assess it but at first look I’d say it’s unlikely you’ll see us again today.”

Walsh moved to within 0.17s of Dumbrell to end up second ahead of Alex Premat in the second Red Bull Holden. 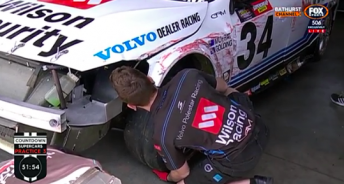 The third of the Triple Eight cars, the Caltex Holden of Steven Richards, was just 26th.

It followed a difficult opening session for Craig Lowndes, who ended Practice 1 23rd after an off at The Chase damaged the front splitter of the #888 Commodore.

“We’re just not fast enough at the moment,” said Richards.

“Clearly the car is a long way from where we’d like it. We’ve just got to keep working away.”

The third and final Supercars practice session of the day will get underway at 1515 local time.