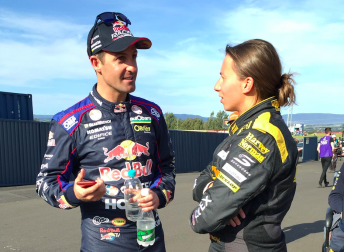 Whincup and De Silvestro after practice

Simona de Silvestro is focussed on closing the gap to the pace-setters after a solid start to her Supercars return at Mount Panorama.

The Nissan driver ended Practice 3 at the foot of the time sheets with her 2:09.18s best proving 3.9s shy of Jamie Whincup.

De Silvestro had been 3.7s away from the pace at the end of the opening day last year, where she was steering a Prodrive Ford.

The former IndyCar driver says she’s pleased to have made a solid start but is eager to close the gap tomorrow.

She even stopped Whincup for a brief chat following the post-practice press conference as she chases improvements.

“This year there is a bit more pressure,” admitted de Silvestro, who will join the championship full-time next year.

“I really have to get my head around and understand how to drive these cars.

“But I’m really enjoying it so far and I felt pretty comfortable in the car right away.

“Now I have to really start looking at the smaller things to go quicker. 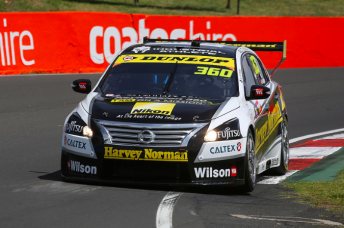 “I think it (the track knowledge from last year) helps quite a bit.

“That meant I could prepare a little bit better… but there’s still a huge gap to the fast ones.

“That gets a bit frustrating as a driver, you want to get better.

“So that’s really the focus, to really start to focus on those things to get quicker out there.”

Renee Gracie meanwhile managed a best of 2:11.45s to be last in the co-driver session earlier in the day, 4.5s behind fast-man Paul Dumbrell.

“It has been a bit of a challenge adjusting to a new car on the track,” said Gracie.

“I’ve quickly realised how hard it is to drive three different cars in two years at this mountain, it’s pretty challenging.

“The first session was definitely about getting comfortable, which I was lacking first up.

“Simona did well in her first session, and she felt good at the end, and then in the final session we split the driving.

“Simona went out on green tyres at the end there, I didn’t, but she went quite quick, which is good.

“I think tomorrow will be a good day.”